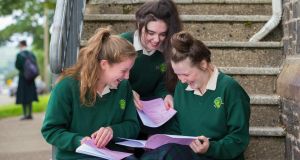 Students struggled with a tricky accent on the German listening exam, but the paper was otherwise very manageable, according to teachers.

Orla Ní Shúilleabháin, a German teacher at the Institute of Education, said the higher-level paper was fair, relevant and accessible to all levels, but that it was a challenge to complete on time.

“As in previous years, there was no scope for rote learning in any way, although some topics reflected themes the students would have covered for their oral exam. The first of the comprehensions dealt with a chance meeting and the development of the relationship between two characters. It was very accessible, but the questions in German would have been demanding for the weaker student.”

Fiona Kenny, ASTI subject representative and a teacher at St Joseph’s Secondary School in Ballybunion, Co Kerry, said that her students were largely positive about the paper and that it was in line with expectations. However, one voice on the aural comprehension was a bit fast and the accent may have thrown some.

“The second text looked at the work of a translator in Brussels and, given the current emphasis on encouraging young people to take up languages, it was nice and current,” said Ms Kenny. “A question asking them to prepare a discussion at a youth conference on the topic of energy strategies allowed them to use their vocabulary about the environment, but they really had to think about what they wanted to say and rote learning wouldn’t have worked for them here.”

The letter topics included the qualities of a good teacher and the Irish language, which Ms Ní Shúilleabháin said gave them decent scope.

Both teachers welcomed the essay on how digital technology has changed our lives, the use of smart phones while driving and how you can learn a language on a smart phone. It was very topical, they said.

Ms Kenny added that the German grammar section, which can sometimes be challenging, included a nice, manageable question about recognising tenses and prepositions.

The ordinary level paper included a question on a YouTube star which would have been of interest to young people, said Ms Kenny. The vocabulary was manageable and, overall, there was nothing out of the ordinary on it.