Move is not due to Brexit, says bank, but is a blow to London’s status as EU financial hub 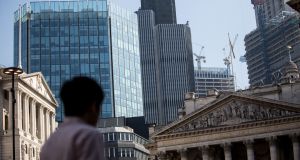 Asia-focused bank Standard Chartered said on Thursday it was setting up a new global business services hub in the Polish capital of Warsaw, the latest expansion by a major bank outside London, Europe’s biggest financial centre.

Poland, by far the largest country in the European Union’s eastern wing, has had strong economic growth over the past decade and has proven attractive for international banks and other companies, partly due to its cheaper labour costs.

Wall Street banks Goldman Sachs and JP Morgan have said they are also planning to increase their presence there. Standard Chartered’s new office, which is expected to open in September, will house a range of operations serving the bank’s growing European and US client base, including technology and finance services, cyber security, as well as traditional banking activities.

A spokesman for StanChart said the Warsaw office was likely to house as many as 750 staff within the next five years, as functions normally performed by its Asian global business hubs migrated to Warsaw. The decision to set up its first European global business services hub in Poland, rather than Britain – where the bank has its European headquarters – had nothing to do with Brexit, the spokesman added. – Reuters