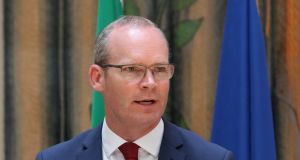 Minister for Foreign Affairs and Trade Simon Coveney: “Our bilateral relationship with Germany is, was and will be of utmost important to us,” he said at Berlin’s Humboldt University. Photograph: Katia Christodoulou

Tánaiste Simon Coveney has said Germany’s divided history means it “gets” the emotive nature of the border issue at the heart of the Brexit standoff.

On a visit to Berlin, Mr Coveney described Germany as an “indispensable partner” and promised more regular ministerial visits as well as a new Munich consulate to follow one in Frankfurt next year.

“Our bilateral relationship with Germany is, was and will be of utmost important to us,” he said in a speech at Berlin’s Humboldt University.

Mr Coveney also had an “open, generous discussion” on Brexit with Bundestag president Wolfgang Schäuble, who reinforced German support for Ireland’s Brexit concerns and “recognised our vulnerability to a bad Brexit outcome”.

Germany’s own history of division had given it an understanding, Mr Coveney said, that borders are not just about trade but about questions of peace and how communities interact. “They really get that here,” he said.

Viewing the site of the former Berlin Wall, Mr Coveney said he had “no intention of being part of [a] government that allows barriers, checks and fences to be built on my island. That is not going to happen.”

He reiterated his hope for greater efforts from London to provide a full legal text of the withdrawal agreement, as well as a detailed political declaration on the future relationship by October.

He said it was too soon to say what deals were done to secure Tuesday’s House of Commons votes and warned Britain not to propose as a backstop “some kind of politically convenient solution that in time will fall apart . . . [because] we can’t have it”.

Asked by a student about the main point of disagreement between Berlin and Dublin, Mr Coveney’s answer – “tax” – prompted some laughter from the audience.

“I think tax policy needs to be driven by what’s good for Ireland,” he said later to The Irish Times. “In a monetary union you need to allow governments have some fiscal tools,” he said.

Mr Coveney was in Germany to present details of a strategic review of bilateral relations, ahead of next year’s 90th anniversary of diplomatic relations between Dublin and Berlin.

7:20 Restarting Ireland: When and how will we ‘get back to normal’?

1 Coronavirus: Varadkar returns to practising medicine to help during crisis
2 Coronavirus: Number of Irish cases nears 5,000 as 21 further deaths confirmed
3 Donald Trump’s clown car administration has put the fear in all of us
4 Coronavirus: Co Tyrone couple buried together after dying 20 hours apart
5 Robbie Lawlor profile: A feared criminal with a long list of enemies
Real news has value SUBSCRIBE