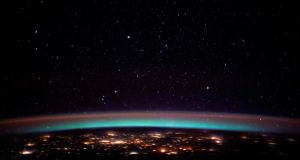 A view of the city lights at the intersection of Europe and Asia as the International Space Station orbits above, in March 2020. Photograph: Nasa handout/AFP via Getty Images

Earth may be in chaos, but the heavens remain as imperturbable as ever, and they will provide quite the show over the next week.

The International Space Station (ISS) will pass overhead again on both Friday and Saturday nights, for the last time in this mission.

It will pass close to Sirius, which is easily spotted in the southwest sky as it is the brightest star. It is under the constellation of Orion.

The ISS will be accompanied by another celestial treat which can be spotted nearby.

The planet Venus will be in alignment with a star formation called the Pleiades or Seven Sisters, which is diagonally opposite Sirius in the far corner of the constellation of Orion.

The Pleiades looks like a hazy cloud studded by six stars visible to the naked eye. It was dubbed the Seven Sisters as the Greeks could apparently see seven stars in the formation. The giant star formation area is also known by its Japanese name, Subaru. The Subaru car manufacturer’s logo is inspired by it.

The full glory of the conjunction of Venus and the Pleiades can best be seen in dark skies away from built-up areas and through a pair of binoculars, though it should still be visible to everybody if the skies are clear. Venus will be at its brightest between 8pm and 10pm in the coming nights.

As well as all this, on Monday at about 5am the planets Jupiter, Saturn and Mars will all be in the southeastern sky. Anybody up that early should look to the direction of where the sun is starting to rise to catch a glimpse.

A word of warning, however. Astrologers blamed the Black Death in the 14th century on a conjunction of the same three planets in 1345.

No such portents of doom accompany the sight of the “golden handle” of the moon, which will be visible on Friday and Saturday nights.

The “golden handle” is the name given to a view of the Jura mountains on the moon. It appears in relief in the top left-hand corner of the moon when it is partially full. Again, a pair of binoculars or a small telescope will show the mountains clearly.

This will be followed by a supermoon on Wednesday. A supermoon occurs when the moon is at perigee, or closest to the Earth. This particular supermoon is called the pink supermoon as it corresponds with the spring flowering of the moss pink in North America.

This supermoon is also the Paschal full moon, which is the name given to the full moon that appears before Easter Sunday.

The moveable feast of Easter is held on the first Sunday after the first full moon after the spring equinox in March.