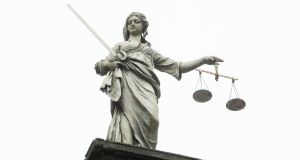 Judge tells mother, “This is a breach of a court order and you have to comply with court orders.” Photograph: Alan Betson / THE IRISH TIMES

A mother has told a court that she is denying her ex-partner access to their son because she is protecting the boy and her family from coronavirus.

The couple are estranged and live in separate homes a number of miles away from each other in Co Clare.

The father hasn’t seen his 12-year-old son since March 4th and solicitor for the father, Frank Doherty stated he has been denied access on 13 separate dates in March in breach of a court order in place for access to the child.

Mr Doherty stated there are 16 access dates scheduled during April.

The mother said she was denying access because “the HSE is telling us not to mix with other people – that is why I am protecting my family from people coming into my house from other houses”.

She told Judge Mary Larkin at the family law court in Ennis: “I am being sensible, I am protecting my child.”

She added, it “would not be safe” for her son to live at his father’s house.

The woman said that along with her husband and their baby, another older family relative lives with them at the family home.

She stated: “We don’t mix. We stay at home. We are living on a farm in a very isolated environment. For that reason, I am keeping my son with me because it is just too risky. None of us wants to get this virus into our home.”

The mother stated that if she allowed access, her son would be mixing with other people, as his father would bring him to meet with his own parents at another address in rural Clare.

The father told the court he lives by himself and has been self-isolating during the coronavirus pandemic.

Judge Larkin told the mother: “I don’t accept that the child is any safer in your house than his father’s house.”

She added: “I have no difficulty sending someone to jail for breach of access. This is a breach of a court order and you have to comply with court orders.”

Judge Larkin stated the law of the land “is not based on HSE directives . . . The law in Ireland is based on what the law is and there is a court order in place.”

Judge Larkin told the mother: “You are going to have to come to terms with managing this access”.

Judge Larkin stated she didn’t believe it is the intention that children should not see their other parent during the course of the coronavirus.

She commented: “The other alternative is that the child would live with his father.”

The mother’s solicitor wasn’t in court for the hearing and Judge Larkin told Mr Doherty to inform the solicitor that “her client is in jeopardy as she is in breach of a court order and could be sent to jail”, adding: “This will have to be resolved”.

The judge told the mother she has the option of making an application to have the current access order varied, asking: “Surely, your son wants to see his father?”

The mother responded: “My son has access to Facebook messenger and the phone and he doesn’t speak with him. He doesn’t want it.”

Judge Larkin stated that she expected the matter to be resolved by the next court date on April 16th.