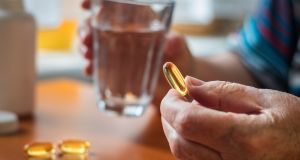 One-in-four people aged over 70 are likely to be deficient in vitamin D, according to the The Irish Longitudinal Study on Ageing research. File photograph: Getty

Adults over 70 who are cocooning under coronavirus measures could be at “high risk” of vitamin D deficiency as they may lack opportunity for sun exposure.

One-in-four people aged over 70 are likely to be deficient the vitamin, according to the Tilda research. The analysis reviews vitamin D deficiency in older people and its implications for Covid-19.

Of additional concern is the fact that only 10.5 per cent of those aged over 70 report taking a supplement despite the “usefulness of vitamin D for immune function particularly at this time”.

“If vitamin D status is sufficient, it could benefit vulnerable adults in particular those 70+ years and older who are ‘cocooning’ during the Covid-19 outbreak,” the Tilda report notes.

Professor of Medical Gerontology at Trinity College Dublin and director of Mercer’s Institute for Successful Ageing Rose Anne Kenny said: “It’s extremely difficult for people cocooning in their homes to get enough exercise and vitamin D is good for muscles and bone health.”

Those most at risk of deficiency include the housebound, people with chronic disease and lung conditions, as well as smokers, the obese and inactive.

There are three main sources of vitamin D – sunlight, food and supplements.

It can be produced from 10 to 15 minutes of sun exposure (before application of sun cream) from late March to late September, through rich food sources like oily fish, eggs, liver and fortified foods or through supplements.

What are the benefits?

Recently, a large meta-analysis of 10,933 people from 25 trials conducted in 15 countries investigated whether taking a vitamin D supplement helped to prevent colds, flu and chest infections.

In a separate trial with patients at risk of respiratory infection, those who received vitamin D supplements for a year experienced a reduction of respiratory symptoms and consequential antibiotic use.

In 2019, a newer analysis using 21,000 participants from across eight studies showed that those with a low blood vitamin D level had a 64 per cent increased risk of community acquired pneumonia.