Coronavirus: About 600 private consultants in limbo after State deal 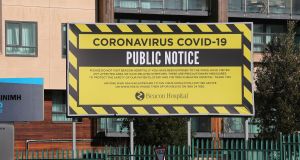 A public notice regarding Covid-19 at the Beacon Hospital, Dublin. Photograph: Nick Bradshaw

Up to 600 private-only medical consultants are in legal limbo and cannot practise due to unintended consequences of the State’s agreement to effectively take over private hospitals during the coronavirus crisis, doctors have said.

He said the State anticipated using this ICU unit given the need for intensive care beds in the face of a surge of patients with Covid-19. However, he said that “without the new contracts, none of the consultants who run the ICU can work”.

The Government has proposed that on foot of its deal to take over 19 private hospitals for three months to deal with the Covid-19 crisis, consultants in the private sector should be offered a temporary locum contract. They would see only public patients and would be paid a salary of €141,000-€195,000 per year.

It is understood private hospitals have now signed the heads of agreement reached with the Government to allow the State to take over their 2,000 beds, theatres and other facilities to assist in dealing with the coronavirus crisis.

Dr Fröhlich said on Friday the Government’s deal had seen it essentially take over “the bricks and mortar” of the hospitals. He said no agreements had been reached with the consultants who worked in these facilities.

On Friday the Irish Hospital Consultants Association urged members practising fully in the private sector for the moment not to sign the proposed contracts.

In a memo to members the association said “a large number of very significant issues” regarding the proposed contracts for whole-time private consultants as well as practice terms had not been clarified despite talks with the Department of Health on Wednesday.

Dr Fröhlich said without new contracts or indemnification there was no way to practise on public patients and the private sector had effectively, albeit temporarily, shut down.

“As a result there are currently an estimated 600 fully private consultants who cannot practise. They have been told clearly by their insurers that they cannot touch patients without indemnification from the State.” He anticipated the Government would move to deal with the indemnity issue.

The State Claims Agency said in new advice to IHCA members on Friday that consultants in full-time private practice who have signed the locum contract with the HSE would be covered by its clinical indemnity scheme in relation to the treatment of public patients .

A spokeswoman for the IHCA last night said its advice to members not to sign the proposed new contract stood, pending the receipt of clarification on a number of issues from the Department of Health.

1 Trump turns to bible for photo op as DC burns around him
2 Covid-19: Easing of restrictions ‘unlikely’ to be speeded-up
3 Couple injured in shooting incident at farm in Co Waterford
4 ‘Frustrated and angry’: Thousands march in Dublin to protest death of George Floyd
5 Large gatherings reported throughout State on bank holiday
Real news has value SUBSCRIBE