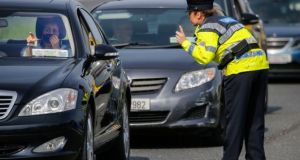 The highest percentage of people moving beyond 10km from home last year occurred during the week up to Christmas Eve, according to the Central Statistics Office (CSO).

The CSO’s Staying Local Indicator (SLI) provides daily estimated percentages of county populations that have stayed within 10km of home, averaged over the preceding seven days.

It shows 48.3 per cent of the population travelled beyond 10km of home in the week ending December 24th – the highest levels of mobility of any point during the pandemic or throughout 2020.

A week later (the week ending December 31st), the percentage of people staying local had increased, with almost 58 per cent of the population estimated to have stayed within 10km of home each day.

The indicator peaked during the first wave of the pandemic, when 76.7 per cent of the population were estimated to have stayed local each day during the week ending April 15th.

During the second wave of the pandemic, the indicator peaked during the week ending November 4th, when 62.9 per cent of the population were estimated to have stayed local each day.

In January and February, prior to the onset of the pandemic, on average 56.5 per cent of the population were estimated to have stayed local each day.

Counties with high urbanisation levels tend to have greater numbers of people staying within 10km of home, reflecting the density of the population and the proximity to essential services such as schools and shops, the CSO said.

Dublin showed the highest percentage of persons staying local of any county for the week ending December 31st, at 66 per cent.

This compares to the more rural counties such as Galway (48.7 per cent), Mayo (48.2 per cent), and Sligo (49.8 per cent) with less than half the county population staying within 10km of their usual place of overnight residence.

“Marked rises and falls in the SLI visibly reflect the imposition and relaxation of movement restriction policies at key dates throughout the year,” he said.