Government plans to vaccinate 700,000 people by end of March – Donnelly

Minister for Health Stephen Donnelly has announced that based on current projections 700,000 people in the State will have received a Covid-19 vaccine by the end of March. Video: Oireachtas TV 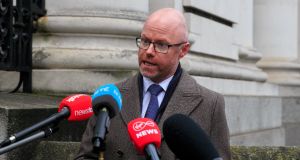 The Government plans to receive enough Covid-19 vaccines to inoculate 700,000 people by the end of March, Minister for Health Stephen Donnelly said as calls were made for the Government to do its own deals to increase the supply of vaccines.

He expected the top three groups on the priority list would be vaccinated – those in long-term residential care and staff, frontline healthcare workers and the over-70s population.

He made the comments as he opened a Dáil debate on Covid-19 and stressed the role of the UK variant of the virus which “is far more contagious than what we dealt with so far now accounts for over half of all cases”.

But the Government was sharply criticised over the slow rollout of the vaccination programme and for the massive surge in cases of the virus.

The Minister acknowledged the strain on hospitals with the huge daily virus numbers and patient hospital admissions and deaths.

The epidemiological situation has deteriorated substantially with a 14-day

The incident rate stands at 1,410 cases per 100,000 population, and the reproduction number, the rate at which the virus is reproduced, estimated last week at between 2.4 and 3.0.

The rate among those over 65 was of great concern with hospital and ICU rates increasing and putting the hospitals under enormous strain.

He said “we are further planning to be able to vaccinate more than 1.5 million people in quarter two and more than that again in quarter three.

“At these levels people most at risk of Covid 19 would be fully vaccinated by the summer.”

He stressed that the UK variant “which is far more contagious than what we dealt with so far now accounts for over half of all cases”.

Minister of State Mary Butler said there were 890 staff in nursing homes out sick and this was a major challenge to the sector which had suffered a surge in outbreaks.

Fine Gael TD Fergus O’Dowd who said there should be no ambiguity about the vaccination of nursing home residents but the Minister said in cases where there small controlled outbreaks they would vaccinate but not in cases of large outbreaks.

Fianna Fáil TD Marc MacSharry called for the Government to “shelve the [being a] good European line” and engage in bilateral arrangements to get extra vaccines for Ireland.

He said “why can’t we be like the Israelis” the leading country in the world for vaccination, or like the Germans who had done their own deal to get extra vaccines.

The Sligo-Leitrim TD asked if the Minister had spoken directly to the leaders of the vaccine producing companies but Mr Donnelly said that was being discussed at the appropriate EU level and which point Mr MacSharry said the State should drop the “good European” line and act for the State.

He said the State might pay an extra premium for the vaccine but he said the extra payment to get people vaccinated would be the equivalent of two weeks of the cost of funding the pandemic unemployment payment.

Mr Donnelly said that the “prevalence of the new Covid variants is also now of considerable concern” and it was “now more important than ever for everyone to stay at home, avoid contact and double down on our efforts to suppress the virus”.

Labour leader Alan Kelly said communications needed to be very tight on the vaccination programme with one person leading on it because “we can’t have multiple ministers coming out” and making often disparate comments. The information being provided has to be consistent, he said for the public to have confidence in it.

Rise TD Paul Murphy accused the Minister of presiding over a health system with the worst incidence of Covid-19 “in the entire world” and asked if he took responsibility for the Government’s decision.

Mr Donnelly said he accepted responsibility for the Government’s decisions but insisted that the surge in cases had not been predicted in any way.

He said the highest incidence predicted was a reproduction rate of 1.8 but it was between 2.4 and 3.0