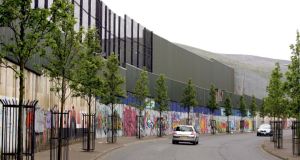 According to the survey, 76 per cent of all residents were strongly in favour of barriers being removed within the lifetime of their children of grandchildren. Photograph: David Sleator

An increasing number of people living alongside peace walls in Northern Ireland want to see them removed within the next generation, according to new research by the International Fund for Ireland (IFI).

The IFI’s Community Attitudes to Peace Walls Survey, which was launched in Belfast on Tuesday, found “clear evidence of positive attitudinal change” among both Protestant/unionist/loyalist (PUL) and Catholic/nationalist/republican (CNR) communities towards the removal of barriers in the six interface areas – five in Belfast and one in Derry – involved in the IFI’s Peace Walls Programme.

According to the survey, 76 per cent of all residents were strongly in favour of barriers being removed within the lifetime of their children of grandchildren, compared with 68 per cent in the previous survey in 2017.

There are more than 100 so-called peace walls in Northern Ireland. The majority are in Belfast, and include walls, fences, gates and other barriers or structures designed to separate PUL and CNR areas in order to provide protection or security to residents.

The IFI has invested more than £5.2 million (€6 million) since 2012 as part of its Peace Walls Programme (PWP) which has enabled groups in six areas to either alter or remove some physical barrier, and amend or re-image others.

The survey found that communities along peace walls continue to experience high levels of social and economic deprivation, and many believe their removal would have a positive impact on the health and wellbeing and employment and housing opportunities for residents.

It also demonstrated an increase in the perceived levels of safety by residents on either side of the peace walls, as well as greater cross-community engagement.

However anti-social behaviour was an increasingly prominent issue of concern across all six peace walls, with 34 per cent of respondents identifying it as the main issue of local concern, as compared to only 10 per cent in 2017.

The report also notes that all six PWP groups had noted arranged fights between young people as a “growing issue” in their area and that local perception was often that these were sectarian in nature, though this was rarely the case.

There was, the report stated, “always concern that this issue will develop as gatherings often take place on the derelict land around interfaces” and the increase in anti-social behaviour had a negative impact on peace wall removal because it reinforced the view held by some residents that they provided security and protection.

The survey also emphasised the continued lack of a devolved government in Northern Ireland, which collapsed in 2017 amid a row over a botched renewable heating scheme.

“Such political dysfunction has impacted on progress towards dismantling the peace walls across Northern Ireland,” the report found, and made it yet more likely that the commitment, made by the North’s government in 2013, that all peace walls would be removed by 2023, can be achieved.

It added that the “singular focus on Brexit has limited attempts to build a united and shared society across Northern Ireland” and “makes work on barrier removal much more complex and difficult.”

The IFI chairman, Paddy Harte, said there must be collaboration between all statutory agencies “to ensure necessary resources and investment are put in place.

“Considerable work is still required to deliver significant change for those impacted the most by peace walls.

“Regrettably, ongoing political uncertainty means that progress is being hampered. Political will and leadership is essential alongside the necessary ring-fenced resources and funding,” he said.