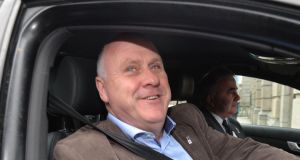 Noel Grealish said a lot of the money being transferred was “absolutely genuine”, but called on the Taoiseach to “give assurances that all the money has been fully accounted for within the Irish tax system”. File photograph: Alan Betson

Independent TD Noel Grealish has been accused of “disgraceful racism” after he questioned the source of some of the €10 billion in personal remittances sent abroad from Ireland in the past eight years.

During Leaders’ Questions in the Dáil on Tuesday the Galway West TD said a “staggering” amount of money had been transferred with the largest amounts going to Lithuania (€843 million), France (€1 billion), Poland (€1.54 billion), UK (€2.7 billion) and Nigeria (€3.54 billion).

Mr Grealish who was involved in another racism controversy in September, said he could understand transfers to other EU countries such as the UK because 100,000 British people were living in Ireland.

But he said in reference to Nigeria that €3.54 billion going to one non-EU country is “astronomical” and he asked if the Revenue Commissioners or the Department of Finance had a method of tracking the source of this money to ensure it was not the proceeds of crime and fraud because more than €1 billion a year was being transferred.

A number of TDs heckled Mr Grealish and Solidarity TD Ruth Coppinger told him “you are a disgrace” as she accused him of “disgraceful racism”.

Minister for Housing Eoghan Murphy asked “where’s the evidence” and further questioned “why is it illegal money if it is not going to the EU”.

Ms Coppinger said it should be called out because he was “suggesting that people who work here are criminals”.

Minister for Justice Charlie Flanagan told Mr Grealish that “more remittances came back to county Galway than to most other counties from the US and your constituents know that”.

‘The way the world works’

Taoiseach Leo Varadkar said “I’m not quite sure where you’re going with on this” because for decades, even centuries, Irish people had gone abroad and sent money home.

“I remember my grandmother – all her family went to America – telling me about the cheques coming from the States,” Mr Varadkar said.

The Taoiseach said there were many people from non-EU countries working in Ireland and paying their taxes.

He said that in Holles Street hospital, near Leinster House there were doctors and nurses from India, Egypt, the Philippines, Pakistan and other countries, working hard and sending money home to families “who probably paid for their education”.

The Taoiseach added: “That is the way the world works.”

Mr Grealish said a lot of the money being transferred was “absolutely genuine” but he called on the Taoiseach to “give assurances that all the money has been fully accounted for within the Irish tax system”.

Mr Varadkar said that in relation to money laundering and tax evasion all the normal controls were in place by Revenue to ensure that it was money legitimately earned.

And he told Mr Grealish that “if you have any evidence, any evidence at all, that anyone is transferring money abroad which doesn’t belong to them, do pass it on to us and we’ll have it checked into”.

At a well attended public meeting in Oughterard in September many of those gathered said they planned to fight plans to provide a direct provision centre in their community. Mr Grealish told the meeting that the type of people to be accommodated in the centre would be “economic migrants from Africa” whom he described as “spongers”, comments which came in for stinging criticism.