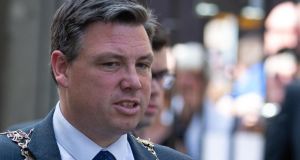 Lord Mayor of Dublin Paul McAuliffe: “There is a perception the city is awash with money.” Photograph: Tom Honan

Lord Mayor of Dublin Paul McAuliffe has said he cannot stand over a city council budget that would see increases in charges and cuts in services for Dubliners.

Mr McAuliffe, of Fianna Fáil, said not compensating the council for the redistribution of rates owed by Irish Water to other counties was a “great swindle” which was having a “profound affect” on the city’s finances.

“There is a perception the city is awash with money. We can sometimes be a little timid about standing up for the city and saying enough is enough, because there is an anti-Dublin bias out there,” Mr McAuliffe said.

Mr Keegan, in a report to councillors ahead of the budget vote next Monday, said “inadequacies” in funding from central Government meant charges would have to increase and there would also be less money available for local services.

In particular he said the council would lose rates income of €8.4 million on Irish Water-owned properties, and would not be compensated by central government despite prior assurances to the contrary.

As a result, councillors will be asked to pass a budget for the city which includes a 36 per cent increase in the East Link toll, average social housing rent increases of €160 a year, a rise in business rates of 1.5 per cent and the second hike in on-street parking charges in a year following a decade without increases.

However, Mr McAuliffe said asking citizens to accept additional charges without providing additional services could only be considered at a time of recession.

“Proposing revenue increases while implementing service reductions is something I cannot stand over. Charging more while offering less is something that might have flown eight to 10 years ago, but not now.”

Fianna Fáil, the Green Party, Labour and the Social Democrats have a governing agreement in the council, and the parties in power would usually ensure the budget is passed. If councillors fail to agree a budget, the council can be dissolved by the Minister for Housing.

Green group leader on the council Neasa Hourigan said the Government had “actively decided to strip power and strip funding from local authorities”. The Government had “declared war on community funding”, she said.

“We are in a very serious situation where, in addition to increased charges, we are facing an 80 per cent reduction in community funding, funding for instance to fix footpaths, all the things that make living in the city bearable and pleasant.”

Labour councillor Dermot Lacey said the budget in its current form could not be ratified but parties would work in the coming days to effect changes.

“This budget we have been presented with raises fundamental issues of how we fund local government,” he said. “The system is clearly dysfunctional. The Department of Housing, Planning and Local Government can’t claim success in any of the areas in its title.”

The cuts in funding at community level meant very successful interventions such as Halloween festivals could be lost, which would result in additional money being spent by the Fire Brigade at Halloween, he said.

Social Democrats councillor Gary Gannon said he wanted more information before deciding how to vote on the budget, but he would be unlikely to support rent increases.