The Secret Teacher: ‘Sure, your woman can’t teach, everyone knows that’ 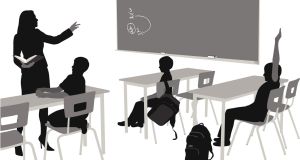 Thanks to this bunch of rebels, lessons are only ever moderately productive, however effective the teacher’s classroom management. Photograph: iStock

I’m looking at five students who have just been brought to my door by a colleague. They have no work with them, and I really don’t want to disturb her by going to ask for something for them to do. One of them would be writing on the desk if he had something to write with; I’ve scrubbed his handiwork from surfaces often enough to know that.

Deirdre was at her wits’ end when she came to the door with them. I was alone in the classroom correcting and honestly don’t mind that they are here. That said, all five definitely feature on the list of students you don’t want to see on your roll book.

I’m baffled that they have all ended up in the same class. It makes for a tough gig for the other 24 members too. Thanks to this bunch, lessons with them are only ever moderately productive, however effective the teacher’s classroom management. As they stare at me staring back at them, I know that they are beginning to wonder if I’m ever going to say anything.

I decide against speaking, as I’m simply unsure where to start and unwilling to allow anger to rise. They are here because of balls of paper being thrown and Tipp-Ex bottles and some complex drama that spilled over from lunchtime into the class immediately afterwards.

I quietly applaud myself for the good deed I am doing. Their classmates are undoubtedly delighted to be getting on with some solid work. I sincerely hope the teacher isn’t dwelling on their problematic behaviour or her handling of it.

She may well be feeling very awkward towards me, if she realises just how dramatically she flounced in to present her band of rebels. She was visibly upset, but I’m hoping that the rest of the group will be lifting her spirits by now.

There are some really fabulous members of that particular class. Some of our school’s most mature and articulate students are in it, and they are admirable for how they demonstrate patience with the more challenging of their cohort.

(Through sheer boredom, I presume, one of these is now using his spit and his sleeve to remove someone else’s drawing from a desk; not the worst response to his new situation here.)

There’s Róisín, an eldest daughter, a studious and thoughtful girl. I’ve seen her take out a book and enjoy a few cheeky pages when she recognises that it’s going to take the teacher a while to get the show back on the road.

Dylan is your perfect middle-man: well able to act the fool and enjoy the craic but knowing precisely when it’s time to get back down to work. On more than one occasion I’ve caught him leading a sssshhhhh, almost certainly hoping he won’t be identified but rock solid in his conviction that teachers need a helping hand from time to time. Perhaps he had tried to help a while ago, before this troop were marched off to me.

Sinéad has a severe arthritic condition which badly affects her limbs and joints. She’s often in considerable pain when in school but she comes whenever she can, as she simply isn’t always able and misses a lot of school time for hospital appointments. It must be torture for her to have dragged herself in today only to have to put up with unnecessary dramas like this. I wonder if she’s even in . . .

I happen to catch a meeting of eyes. One pair reveals genuine fear at having been caught in the act. (What act?) The other pair still smirks rebelliously. I marvel at how those same eyes inspired such desperation in a teacher so shortly before.

Extraordinary how the dynamics in a group can change so quickly. I am not feared by the pupils in our school, but without an audience this youngster is in a very different place. The bravado has gone, and the longer my silence goes on the more he fears the consequences of today’s events.

Divide and conquer has worked here, and I admire my colleague’s courage in admitting she couldn’t cope with that particular class behaving the way they did at that time. The dynamics were all wrong and she did what was required to change them.

Tipp-Ex, balls of paper, a lunchtime argument – these were the tip of some iceberg Deirdre could neither have expected nor prepared for. No more than any of the students. The lives we each lead, whether at the desks or in front of the class, impact on the whole group throughout the day, most of the time invisibly. But homework must still be corrected, grammar learnt, calculations completed, so there is no escape: we must all work together the whole day.

The bell rings and the five remain where they are. They seem to be waiting for a cue from me. I nod. Sternly. It works well, as they get up quietly and push in their chairs. They sense freedom, and they aren’t prepared to do anything to jeopardise it. Just as the third is leaving the room I can’t resist breaking the silence: “What was all that about anyway?”

“Sure, your woman can’t teach, everyone knows that,” says Rebel Number Four as he shoots out of the door, the graffiti-artist-turned-cleaner hot on his heels.

Still the rebel voice, perhaps. But I suspect he too has done some thinking.