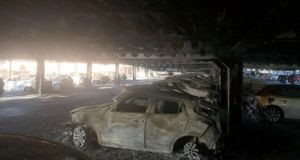 The aftermath of a large fire in the multi-storey parking facility of the Douglas Village Shopping Centre in Cork. Photograph: Cork City Fire Brigade/PA Wire

Demolition work has begun at Douglas Village Shopping Centre in Cork which was gutted by fire in August, causing €10 million in damage.

The centre is still on target to reopen for business next summer, according to the shopping centre’s manager.

The centre was badly damaged in a blaze on August 31st when an Opel Zafira car caught fire on the first floor of the multi-storey car park, resulting in damage to 49 vehicles.

The blaze caused major structural damage to the car park with girders buckling so badly in the 1,000 degree heat that the shopping centre had to be closed, leaving up to 50 traders looking for alternative accommodation.

Douglas Village Shopping Centre manager, Bartosz Mieszala said contractors had been carrying out preparatory work for the last few weeks on the interior of the bulding. Demolition work began on Tuesday and is likely to continue until the end of the year.

“We have been working inside for a couple of weeks, dismantling some of the building and prepping for the demolition which started today on the middle section of the building which will see all three floors brought back down to ground level,” he said.

“It’s estimated that the demolition will bring the contractor up until the end of this year and we are still on target to re-open next summer,” said Mr Mieszala.

Local Fine Gael Senator, Jerry Buttimer raised the plight of some of the tenants in the Seanad last week when he called on the insurance industry to respond promptly to traders who have found themselves temporarily put out of business as a result of the fire.