Immediate review of issuing of knackery licences to be held 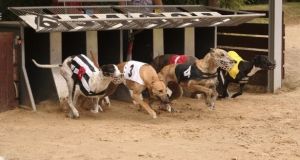 Minister of State at the Department of Agriculture Andrew Doyle said there needs to be proper traceability of dogs similar to databases that exit for cattle.

An immediate review of the issuing of licences for knackeries will be conducted, Minister of State at the Department of Agriculture Andrew Doyle has said.

The announcement comes after an RTÉ Investigates programme on Wednesday highlighted the practice of some knackeries euthanising greyhounds for as little as €10 to €13 per animal. Knackeries are not allowed to kill greyhounds.

The programme also exposed that the greyhound industry is overbreeding by a factor of 10 and many greyhounds, who do not perform, are being shot illegally.

The programme highlighted an unpublished report commissioned by the Irish Greyhound Board (IGB)and carried out by Preferred Results which revealed that of 16,000 greyhounds are born in Ireland every year.

About 6,000 are killed because they failed to make qualification times or their performances declined.

Mr Doyle told RTÉ radio’s News at One that it was not acceptable in any sort of civil society to have animals treated in this way.

However, he said that the majority of greyhound owners loved their animals and would not condone such behaviour. “This is a minority that have tarnished the entire sector.”

As a farmer and a person who cares for animals himself, he found the details revealed on the programme “totally revolting,” he said.

The level of culling detailed in the confidential report which was prepared for the IGB in 2017, was “hard to fathom” he said.

He said that since he took up his position in 2016 the industry has gone through a number of reforms and more will come about because of the Greyhound Racing Act of 2018.

There needs to be proper traceability of dogs similar to databases that exit for cattle, he added.

Mr Doyle said there is no doubt that the sector will come under pressure to make changes, there will have to be assurances from the industry that they are determined to improve their reputation and that “the people who treat their animals like this are exposed.”

It had been “horrific” to see footage of animals “being treated like that in this State.”

There will be an immediate review of the issuing of licences to knackeries, some of which will be revoked “if that’s what it takes,” he says.