Multiple car collision on M50 brings traffic to a crawl 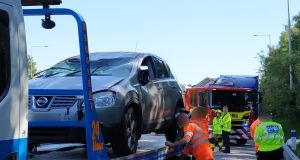 One of the cars involved in a collision on the M50. Photograph: Dublin Fire Brigade

A crash on the M50 is causing huge tailbacks on Ireland’s busiest motorway.

A collision on the northbound carriageway between Junction 6 at Blanchardstown and Junction 5 at Finglas has closed two lanes.

One of the cars involved in the multi-vehicle collision rolled over.

Dublin Fire Brigade tweeted: “Firefighter/Paramedics from Finglas, Blanchardstown and Phibsborough have attended a roll-over RTC on the @M50Dublin Northbound at junction 6. One person treated and transported for minor injuries. Recovery services are removing the vehicles. @aaroadwatch @LiveDrive”

Emergency services are on scene at a collision N'bound between J6 Blanch and J5 Finglas blocking the left and aux lanes. Traffic is heavy on approach. #m50safety pic.twitter.com/aBBqirnj2Z

Firefighter/Paramedics from Finglas, Blanchardstown and Phibsborough have attended a roll-over RTC on the @M50Dublin Northbound at junction 6. One person treated and transported for minor injuries. Recovery services are removing the vehicles. @aaroadwatch @LiveDrive pic.twitter.com/ETaLxr8QeK

The road has been cleared but traffic is heavy in the area.

AA Roadwatch said traffic is “extremely slow” in the area and already backed up before Junction 7 (Lucan). It is also slow from the N3 inbound as a result of the crash.

There were also reports of a crash on the southband lane and southbound traffic was slow as a result.

Motorists have tweeted photographs of the jam. One tweeted: “M50 is stand clear. Total gridlock. Climb in the ice box and shut the door.”

Motorists have been asked to expect delays of between 20 and 40 minutes for their journey.