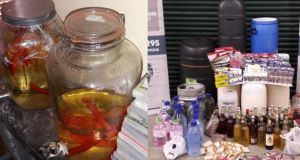 Some of the alcohol and tobacco products found during a search of a house a house and a car in Carrigadrohid, Co Cork. Image: Revenue

Revenue and Customs officers have uncovered an illicit vodka distilling operation in an area of Co Cork that is traditionally associated with producing poitín.

There is a long history of poitín stills being uncovered around Macroom and the town capitalised on its reputation when it launched the Macroom Mountain Dew Festival in the 1970s.

Revenue officials seized 315 litres of vodka in when they raided a house in Carrigadrohid between Macroom and Coachford. They also found production apparatus, tanks and containers in a shed attached to the property. With assistance from their sniffer dog, Harvey, 4,500 contraband cigarettes and 6.5 kg of tobacco were found in a car. The cigarettes were branded West, Rothmans and Marlboro while the 6.5kgs of tobacco was branded Amber Leaf and West, Revenue said.

“The potential retail value of the alcohol, cigarettes and tobacco seized is approximately €17,200, representing a potential loss to the Exchequer of over €12,100,” said Revenue in a statement. Some €6,295 in cash was also taken under proceeds of crime legislation.

A man in his 50s and a woman in her 30s, both from Poland, were interviewed at the scene and a file will now be prepared for the DPP.

Revenue said anyone tempted to buy cheap alcohol or tobacco products from an irregular source of supply should be aware there is a high possibility that they are counterfeit and dangerous.