Political editor of the Irish Times Pat Leahy looks at what happens next now the Government has agreed to hold a referendum on repealing the Eighth Amendment to the Constitution. 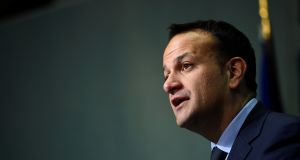 ‘Where Leo Varadkar’s moment was concerned, it was widely described as ‘historic’ and ‘a watershed’ and, of course, ‘seismic’.’ Photograph: Clodagh Kilcoyne/Reuters

About that thing in Government Buildings. Did it really happen?

That thing on Monday night where a Fine Gael Taoiseach, with a Fine Gael Minister for Health standing beside him in support, called a press conference to say he will campaign to take abortion out of the Constitution and allow Irish women – subject to a strict 12-week limit – make the deeply personal decision on whether or not they want to be pregnant.

It was one of those moments, Monday night.

Momentous, obviously, no matter where you might stand on the reproductive speculum, sorry, spectrum.

Yesterday morning’s news programmes where about little else as Leinster House’s foremost experts on gynaecological matters sallied forth to explain the finer points of midwifery to obstetricians and suchlike.

Where Leo Varadkar’s moment was concerned, it was widely described as “historic” and “a watershed” and, of course, “seismic”.

And his words coming on top of a similar declaration a couple of weeks earlier by the leader of Fianna Fáil, Micheál Martin.

But to hear an actual taoiseach declare in public that the time has come to face up to the reality of abortion for thousands of Irish women every year was a defining moment in the social history of this country.

“We already have abortion in Ireland but it is unsafe, unregulated and unlawful. We cannot continue to export our problems and import our solutions,” he said.

Varadkar – like Martin before him – laid out his reasons explaining why he supports the repeal of the Eighth Amendment and why be believes abortion should no longer be an article within its pages “but rather a private and personal matter for women and doctors”.

How would the Dáil react to this?

There was hardly a peep out of anyone while the Taoiseach was in the chamber, save for a very complimentary contribution from Sinn Féin’s Louise O’Reilly, who thanked him for showing “leadership” and commended him for speaking on behalf of all the people who want to see the Amendment repealed.

“Today is a momentous day for Irish women and Irish society,” she told him.

O’Reilly, who was standing in for her new party leader, Mary Lou McDonald, was so pleased by his speech that she offered to “pop over to Dublin West” and help him do some campaigning on his home turf. In fact, in the interests of putting up a united campaign, she thought it might be a good idea if local TDs Ruth Coppinger and Joan Burton joined the canvassing effort too.

But if such collegiality across the political board was seismic on the floor of the Dáil, it was another historic watershed when Louise invited Leo across the city to do a spot of canvassing with her in Fingal.

Whereupon the Taoiseach thanked the Sinn Féin TD for her kind remarks, which he considered “very generous”.

So very quiet and calm in the Dáil. After such a groundbreaking speech on abortion, the atmosphere around the place was a little unreal.

Perhaps the pleas from people on both sides of the debate about respecting each other’s opinion was having an effect.

For grizzled veterans who witnessed the divisive and vicious level of campaigning back in 1983, it’s maybe a little too quiet, a calm before the storm.

Matters looked slightly ominous when a number of TDs who have spoken strongly against abortion sat in a line outside the chamber, along the back wall, at the start of business.

Danny Healy-Rae and next to him his brother, Michael Healy-Rae, their rural group Michael Collins, and then James Lawless and Thomas Byrne of Fianna Fáil. As Leaders’ Questions got under way, they were joined at the back wall by Fine Gael’s Peter Fitzpatrick, another very vocal anti-abortion campaigner who was a leading light of the anti-abortion rump in the recent Eighth Amendment committee.

What was going on? Was some sort of filibuster in prospect? The beginning of what could be several attempts at parliamentary delaying tactics in an effort to move the referendum date to much later, when students have gone abroad for summer?

It was an intriguing sight.

Meanwhile, below them, Leaders’ Questions continued with issues such as the health service and the Garda IT system but, apart from O’Reilly’s conciliatory contribution, there wasn’t a mention of abortion.

Eventually, the lads along the wall, who looked like students told to stay back after school for detention, began to look interested. This was because an usher was approaching with a box. They leaned forward, then the usher placed the box on a little table beside Danny Healy-Rae and removed the lid. The TDs dived in, but in a respectful way. There was no pushing as they each took a laminated page from the box, each page had a big number on it.

They were ensuring they would be called to ask a question in the session called Questions on Promised Legislation, where they can raise all sorts of matters to do with their constituencies if they tie some aspect of legislation into their queries. This is a new system. An effort to stop TDs grumbling when they put up their hands and the Ceann Comhairle doesn’t call them.

Last week, the numbers were given out in advance of Leaders’ Questions, but this led to arguments about people getting numbers and giving them to other people and complaints that TDs who had to go to committees couldn’t queue up to get a number.

The Healy-Raes were first in the queue last week too.

So this time, the number cards weren’t distributed until Leaders’ Questions were almost done. It’s not the best system. It doesn’t look good to have a large number of deputies cooling their heels out of sight of the main speakers during the set piece session of the day.

Once they got their numbers, they trotted off to their seats, like successful bargain hunters who got in the doors early on the first day of Arnott’s sale.

And again, not one of them mentioned abortion.

James Lawless wanted to talk about the terrible overcrowding on commuter trains from Kildare during peak morning and evening hours. What is the Government going to do to alleviate the situation?

It’s worse for the people in his constituency, he said, because when the train comes through from Kildare there’s no space left for them.

That’s the problem of a rising economy, he said, happily, pointing out that he’ll be launching a new 10-year plan shortly to deal with the problem.

Leo agreed again. “It was particularly bad this morning.”

“It took me 75 minutes to travel into the city,” sighed Leo, who had a garda driver and can use the bus lanes. The traffic wasn’t so bad last week, he remarked.

“It was just as bad last week,” said Joan, who takes the bus.