What sort of Boris can Ireland expect? 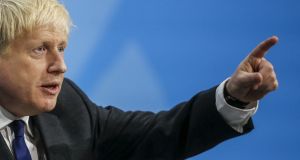 Boris Johnson: For a politician about to reach the high office – nobody appears to trust a word he says. Photograph: Simon Dawson/Bloomberg

Senior figures in the Irish Government no longer wonder about whether they will be faced with Boris Johnson or Jeremy Hunt as the next British prime minister. Barring a political earthquake of monumental proportions, they accept that it will be Johnson.

However, they do wonder about which Johnson they will get. Irish diplomats have combed through his speeches and articles. They have gathered information, views, opinions and the countless perspectives on him that exist.

Eyes widened at reports this week that he had wondered of the Taoiseach, “Why isn’t he called Murphy like the rest of them?” a jibe that isn’t even funny. The quote had not seen the light of day before but it may, or may not, have been news in Dublin.

The Irish Embassy in London has an exceptionally wide and effective network for taking soundings throughout the political and media world in Westminster and beyond, and they have been funnelling reports back to Dublin. Still, the view in Dublin is: we’ll wait and see what he says. The subtext: we have no idea what he’ll do. The wait-and-see stance rests upon a remarkable fact that for a politician about to reach the high office in his land: nobody appears to trust a word he says.

Perhaps that’s not surprising. He has promised, repeatedly, to take the UK out of the EU by October 31st, “do-or-die”, with or without a deal. Though he has also said that once the EU sees that the UK is serious about leaving with no deal, it will consent to changes to the backstop, which would enable an orderly Brexit to happen on the agreed October date.

“He has promised the ERG [the European Research Group of hard-line Brexiteers, led by Jacob Rees-Mogg] that he will leave without a deal if necessary and he has also said that he wants to unite the country,” says Bobby McDonagh, a former Irish ambassador to London. “But the two statements are completely incompatible. He has to betray somebody.”

Another Irish official puts it slightly differently: are we going to get mayor of London Boris, or foreign secretary Boris?

In the mayor’s office, Johnson had strong deputies and gave them the powers to do the work he wanted done. As foreign secretary, he was disorganised, directionless, ineffectual (he eventually resigned from the cabinet over Theresa May’s Brexit policy, having repeatedly endorsed it). Even Johnson’s supporters seldom refer to his time as the UK’s diplomatic and foreign policy supremo. Throughout the campaign for the leadership, he has hardly mentioned it.

Warning light here: being prime minister is an infinitely more difficult job than being either mayor of London or foreign secretary. And the stakes – for Ireland and the UK – are a lot higher. The decisions Johnson makes in the coming weeks and months will have a direct bearing on the lives of people throughout Britain and Ireland for decades to come.

In Dublin, Ministers and officials say they are conscious of the need not to let Brexit dominate the business of government to the exclusion of all else, in the way that it has done in the UK.

And yet they confess that nothing approaches the issue in importance. That will become clear once Johnson becomes prime minister and the recent otiose phase of Theresa May’s lame-duck period gives way to three months of deal-or-no-deal decision time.

Dublin half-expects a visit from Johnson soon after he becomes prime minister, possibly even next week. Then there will be no extended August break for senior politicians and officials: they’ll all be back at their desks by the middle of the month, trying to figure out: which Boris?

It’s not just Dublin that’s trying to figure out which Boris they’ll get. In London, they’re not much clearer. Even his hard Brexiteer supporters, as The Irish Times London Editor Denis Staunton has reported, are nervous that as prime minister, Johnson will sell them out. If he does, they mutter, they’ll take him down.

Patrick Maguire, political correspondent with the New Statesman magazine in London, says that Boris will want to be both Borises – the brash Brexiteer in order to get a new deal from Brussels, and the pragmatic centrist who can govern, and win an election, as a one-Nation Tory.

In Brussels, they think he is simply a liar and a charlatan

Blair Horan, a retired trade union chief who researches and writes on Brexit issues for the Institute of International and European Affairs think tank, sees this possibility, too, and worries it will end up stumbling into a no-deal.

“He might hardball it, he’ll think the EU will blink, and he’ll go through with it [a no deal] if the EU won’t move,” he says. “The danger for him is that he will end up as the shortest-serving prime minister ever.”

If this is the Johnson plan it hinges on one very questionable assumption: that Brussels and Dublin will be sufficiently impressed/intimidated by Brexiteer bluster that they will consent to a change in the backstop arrangements contained in the withdrawal agreement.

That might turn out to be the case. But at present there is little evidence that it will. And there is a lot of evidence that it will not. For a start, there is a series of frequent and repeated statements from Irish and EU leaders. There is the fact that it is clearly against the EU’s interests to do so. And there is the fact, attested to by Irish and EU sources, that many people in Dublin and Brussels believe that (a) Johnson is bluffing about a no-deal and (b) even if he isn’t bluffing, parliament will stop him.

Their belief in the latter – prompted by contacts with British ministers – has been bolstered by the result of Thursday’s vote in the House of Commons, which seeks to block the suspension of parliament. Even though it is not clear that parliament can effectively prevent a no-deal outcome, it is certainly clear that it will try. Having already endured the fiasco of dealing with a prime minister who could not control her parliament, this will not encourage the EU to negotiate with Johnson.

Some sources in Dublin, London and Brussels say that Johnson’s only hope of progress is to approach the EU with a realistic proposal and a conciliatory mood. The EU is not going to tear up the backstop and Johnson knows that. But a change, centring mostly on the political declaration (which charts the direction for the future trade deal) but perhaps involving tweaks to the backstop, might be a different matter. It would at least be more difficult to reject. On Thursday, the Taoiseach suggested that the backstop could be changed from an arrangement which covers the whole of the UK, to one which just related to Northern Ireland. This would, after all, mean reopening the withdrawal agreement. But it is far from clear that Johnson has either the desire or political capacity for such a nuanced approach.

And whatever he says about Dublin, Johnson will be dealing not just with Leo Varadkar but with the EU, whose remarkable cohesion on the question shows no sign of slipping.

And in Brussels, they think he is simply a liar and a charlatan. Having been subjected to Johnson’s malicious and frequently mendacious journalism, and having watched his championing of Brexit with growing horror, the EU is disinclined to give Johnson the benefit of the doubt.

A “spoilt child of a man, who lies like a toddler and has only the vaguest of political convictions” was the description a former EU spokesman, Jean Quatremer. And yet, Quatremer reflected, “a pragmatic buffoon might be better than a fanatic”.

“Many in Brussels believe he is capable of any move, even backtracking and shelving Brexit if he thinks it could be turned to his personal advantage,” he wrote.

It is this personal and political unpredictability that make the forthcoming Johnson premiership, its Brexit policy and its ultimate direction so uncertain. Everyone will wait and see. But the range of possible outcomes is dizzyingly wide.

“I doubt if he is sitting around talking to serious people,” says McDonagh. “My sense is that he acts instinctively . . . He will smell the air and decide where political advantage lies.”