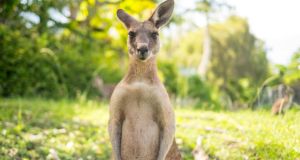 A spokesperson for Fota Wildlife Park said it did not appear that the animal was from Fota. Photograph: iStock

Gardaí in north Co Cork have confirmed that they have received reports of a kangaroo hopping around Kilworth and have urged any members of the public to report any further sightings of the animal.

Supt John Deasy of Fermoy confirmed that they had received a report of a kangaroo north of Kilworth this morning and have viewed footage of the animal which has been posted on YouTube.

“We’ve viewed the footage and have been in touch with people at Fota Wild Life Park who tell us that it is a wallaby and that it poses no threat to the public so people need have no fears,” said Supt Deasy.

“As such it is not a garda matter but we’ve been in touch with the Wildlife Service but we would urge anyone who sees the animal to report the sighting to us and we can pass it the details to them.”

It’s understood that the wallaby was spotted by taxi driver, Noel Smith as he was driving to work between Mountain Barracks and Kilworth at around 5.30am this morning and he filmed the animal on his phone.

Supt Deasy said it appeared that wallabies are being imported as pets into Ireland and it was possible that the animal may have escaped from someone’s home or property in the Fermoy or North Cork area.

A spokeswoman for Fota Wildlife Park confirmed that no wallaby was missing from the park where over 50 Bennett’s Wallabies are enclosed within a 3m high chain link fence within the Wildlife Park.

“A wallaby is unlikely to travel on its own for more than 2 kilometres from its herd and instinctually would be most likely to return to its herd if it became separated for any reason,” said the spokeswoman.

Wallabies, which like kangaroos, have powerful hind legs and can hit speeds of up to 48kp/h and so can travel long distances in the course of a number of hours.

Anyone who may have seen the animal in the Kilworth or Fermoy areas is asked to contact Fermoy Garda Station on 025-82100 and they will relay the information to the Wildlife Service.