‘This folly’: Boris Johnson on the border issue 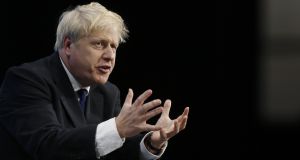 Boris Johnson has hardened his rhetoric against the backstop. Photograph: Simon Dawson/Bloomberg

During the referendum campaign, Boris Johnson promised while in Northern Ireland that the border would remain “absolutely unchanged” in the event of a leave vote – around the same time as Theresa May, incidentally, was down the road arguing that the open border would be imperilled by Brexit.

By February 2018, now foreign secretary, Johnson argued that managing the Border would be no more difficult than managing the London congestion charge.

“There’s no border between Islington or Camden and Westminster,” he said, “but when I was mayor of London we anaesthetically and invisibly took hundreds of millions of pounds from the accounts of people travelling between those two boroughs without any need for border checks whatever.”

His pooh-poohing of the Border problem continued. He was recorded at a private dinner in June 2018 saying it was “just beyond belief that we’re allowing the tail to wag the dog in this way. . . We’re allowing the whole of our agenda to be dictated by this folly”.

Having been part of the British government that agreed the backstop in principle in December 2017, he resigned from the cabinet six months later and declared his opposition to the measure. Keynote speaker at the DUP conference a few months later, he declared: “No British Conservative government could or should sign up to anything of that kind.”

But after voting against it, he later voted for the withdrawal agreement which contained the backstop.

In recent weeks, campaigning for the Conservative leadership, he has hardened his rhetoric against the backstop, pledging to remove it from the withdrawal agreement and leave the EU without a deal if Brussels and Dublin don’t agree.