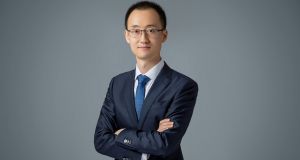 Tony Yangxu says Huawei is ‘a strong supporter of the principles of academic freedom and freedom of expression’.

The chief executive of Huawei Ireland criticised “false attacks” from an academic who raised security concerns about the telecoms company accessing Ireland’s 5G network, in a letter to Minister for Defence Simon Coveney.

In a December 17th letter, Tony Yangxu, head of Huawei Ireland, said the academic paper constituted an “extraordinary and completely false attack” on the company.

Mr Yangxu said Huawei was “a strong supporter of the principles of academic freedom and freedom of expression” but that this was “a two-way street.”

The letter, released to The Irish Times under the Freedom of Information Act, was sent to Mr Coveney, Department of Defence secretary general Jacqui McCrum, and Defence Forces chief of staff Vice Admiral Mark Mellett.

Mr Yangxu requested their “full support in mitigating the damage that has been done”, so that it did not “contaminate” Ireland and Huawei’s collective future.

The company had not been “afforded any opportunity to counterbalance the false allegations” before they were published in the military journal.

In the paper, Dr Maher said the company’s suspected close ties to the Chinese government left it susceptible to being pressured.

Critics of Huawei argued that these links “could allow the Chinese government to infiltrate these networks, leaving countries vulnerable to intelligence gathering, data theft, or sabotage”, he wrote.

The ownership structure and operations of the company also remained “opaque and secretive”, he said.

As 5G was likely to play a key future role in the country’s critical infrastructure, the damage from data security risks “could potentially be incalculable”, he wrote.

“Sometimes this influence is in the background; other times it is in the foreground. But all private companies in China are broadly expected to advance the goals and interests of the Chinese government,” he said.

Responding to the claim Huawei should have been allowed to comment on his paper before publication, he said this was “not how academic research and publishing operates”.

In a statement, David James Kenny, Huawei Ireland head of public affairs, said the company had been a “committed partner” of Ireland for 16 years.

It was “extremely disappointed to see a one-sided article, based on opinion rather than fact, in what is positioned as an advisory publication to the State”, he said.

On December 23rd, Ms McCrum met Mr Yangxu to discuss the matter, and she said the paper was the “analysis and interpretation” of the author.

The journal carried a disclaimer stating the articles had been “subject to academic peer review, and do not indicate the official approval of the Defence Forces, or Department of Defence”, minutes of the meeting state.

Vice Admiral Mellett has since ordered a review into the oversight of the military journal, following a row between the Defence Forces and the department, over a separate article that criticised the number of civil servants overseeing the military.