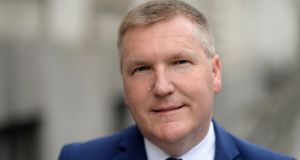 Minister for Public Expenditure Michael McGrath said the deal provides certainty to the Government on pay and industrial relations over the next two years. Photograph: Dara Mac Dónaill / The Irish Times

The new public service agreement provides certainty to the Government on pay and industrial relations over the next two years, Minister for Public Expenditure Michael McGrath said on Tuesday.

However, despite the new accord reached with bodies affiliated to the Irish Congress of Trade Unions (Ictu), Ministers are likely to face challenges in a number of areas in the months ahead.

Associations representing thousands of key public service personnel such as gardaí, psychiatric nurses and members of the Defence Forces have not signed up to the new agreement as of yet.

These organisations, which are outside of Ictu, are deeply unhappy at the way the negotiations that led to the new deal were handled. They believe that, despite prior assurances from ministers that they would be treated as equal partners , they were shut out of the crucial, final rounds of talks and that the Government opted to deal only with the Ictu unions.

The association representing military officers, RACO, said it had not yet been able to brief and ballot is members on the deal as it had not received clarifications that had been promised by the Department of Public Expenditure.

The executives of the Garda Representative Association and the Psychiatric Nurses Association are to meet on Friday to consider the agreement and their next steps.

Even within the Ictu group of unions there are some who have significant grievances building up. Public health doctors are engaged in a process with the Department of Health over contracts and pay issues and in January held off on a planed strike.

It is unclear at this stage whether medical laboratory scientists who are pursuing a long-standing pay parity claim will be bound by the majority decision on the Ictu public service committee on the agreement. Its executive is meeting on Thursday.

The deal provides for modest 1 per cent increases this year and next year and introduces a new sectoral bargaining arrangement aimed at dealing with outstanding claims and awards. A fund equal to a further 1 per cent of the pay bill has been allocated for this process.

How this will work in practice remains to be seen and there are talks between unions and the Department of Public Expenditure next week.

The Government is also likely to press for reforms and work changes agreed in response to Covid-19 to become permanent, an issue that could potentially become a flashpoint depending on the type of changes it has in mind.

The Government has departed from the policy of its predecessors that additional, unpaid working hours for staff introduced under the Haddington Road agreement in 2013 at the height of the recession were permanent.

Over the last year or so there has been a growing campaign by some unions to have these abolished. The deal provides for an independent body which will report on this whole area by the end of the year. Crucially, the Government has agreed to put in place a €150 million fund in 2020 to pay for the implementation of its recommendations.

Mr McGrath said on Tuesday that “moderate steps” would be taken over a period of time to address the additional hours issue. Whether any Government timeline would be acceptable to union members remains to be seen.