Five remanded in custody over killing of Irish teenager in Australia 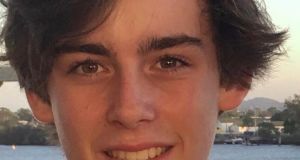 Cian English (19) suffered fatal injuries when he fell from a fourth-floor balcony in Brisbane last year.

Three men and two teenage girls charged with the murder of an Irish teenager in Australia have been remanded in custody until their trial date is set.

Cian English (19), originally from Bullock Park, Carlow town, suffered fatal injuries when he fell from a fourth-floor balcony at the View Pacific resort in Surfers Paradise at about 3.15am on May 23rd, 2020, during an alleged robbery.

The teenager was living in the eastern Brisbane suburb of Hawthorne with his parents and older brother.

The teenager fell to his death when he was robbed at knife point following an apartment party. He attempted to escape but fell from the fourth-floor balcony.

The five accused, Jason Ryan Knowles (22), Hayden Paul Kratzmann (20) and Lachlan Paul Soper-Lagas (18) along with two girls, who cannot be named as they are minors, reappeared before Southport Magistrates Court and Children’s Court on Tuesday, according to a police spokesperson.

All five are charged with murder, stealing, robbery, torture and deprivation of liberty. They have been in custody since the fatal incident last May.