How will the new graduated speeding penalties work? 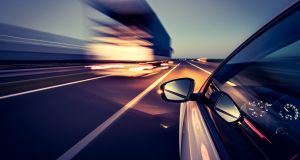 New graduated penalties for motorists caught driving over the limit were approved by the Cabinet on Tuesday and will come into force shortly. Here is what the changes will mean for motorists.

What are the new penalties?

Under the new system there will now be a range of escalating penalties depending on the extent to which a driver is over the limit.

- Drivers up to 10km/h over the limit will receive a €60 fixed charge and two penalty points. If convicted in court a driver faces four penalty points.

- Drivers caught between 10 and up to 20km/h over the limit will receive an €80 fixed charge and three penalty points. If convicted in court a driver faces five penalty points.

- Motorists detected between 20 to 30km/h over the limit will receive a €100 fixed charge and four penalty points. If convicted in court a driver faces six penalty points.

Is there another new, higher new penalty?

Yes. For drivers detected 30km/h over the limit there is a new stand alone offence which will result in an automatic court appearance. The penalty on conviction for this offence will be a fine of up to €2,000 and seven penalty points. Those convicted of three or more such offences within 12 months face three months in prison.

How do the new penalties compare to the current penalties?

At the moment a driver caught speeding faces a fixed charge fine of €80 and three penalty points regardless of their speed. If this fine is unpaid or challenged in court and the driver convicted they automatically receive five penalty points and a fine of up to €1,000.

Gardaí have the option of charging a driver significantly over the limit with dangerous driving, which can result in disqualification on conviction.

Why does Shane Ross want to change the speeding penalties?

The Minister wants speeding penalties to distinguish between those marginally exceeding the limit and those driving excessively over the limit. “The objective is not to penalise people but to change behaviour. We don’t want to catch people speeding; we want to encourage them to stop speeding so as to prevent deaths and injuries on our roads.”

Should motorists be petrified of losing their licence under the new penalties?

Some should be, but, according to the Minister, not all. Mr Ross says around one in five drivers caught speeding are less than 10km/h over the limit. They will receive a lower fine and two, rather than three penalty points. Mr Ross said data from the Garda suggests almost 60 per cent of all speeding drivers were less than 20km/h over the limit and under the new regime will not face higher penalties.

When will the new penalties come into force?

Hard to know. The Minister is incorporating the changes in the Road Traffic (Miscellaneous Provisions) Bill 2019 which needs to go through the Oireachtas. Mid-2020 seems most likely but filibustering from certain rural TDs who vigorously opposed changes to the drink-driving laws and a likely general election could delay it.

Was there any dissent in Cabinet on today over the proposals?

Much was promised but little materialised – unlike 12 months ago when Mr Ross first proposed the idea of graduated penalties for speeding and it was shot down. His new plan, a watered down version of the original idea, and following communications with the Attorney General, received broad support in Cabinet on Tuesday.

What were the original plans?

The penalties suggested in 2018 were more severe and would have seen a driver 30km/h over the limit face prosecution for dangerous driving. This was seen as potentially unfair as it failed to take into account the context in which the driving occurred.

Will more people lose their licences under the new penalties?

Almost certainly, at least in the short term, until drivers adjust to the new system. And there will be long and bitter complaints over bonkers speed limits in various parts of the country. At the moment more than 514,000 drivers have penalty points, the majority of whom – 357,284 – have three.

What happens if you disagree with a speed limit?

The Minister intends to create an appeals mechanism to allow “questionable speed limits” to be reconsidered by road authorities. He says this will allow drivers who believe a particular speed limit in a location is incorrect to be subject to a technical review based on the speed limit guidelines.

Road safety campaigners must be delighted?

Actually they are not. Road safety group Parc believe the proposals are unworkable and will compound the many difficulties and loopholes in the various Road Traffic Acts, which they believe urgently require consolidation. They cite the fact that the vast majority of drivers disqualified in court fail to surrender their licence.

What about the legal profession’s view?

David Staunton, barrister who specialises in road traffic law, believes most people who have been subject to a speeding prosecution would feel a graduated system is more equitable and fair by taking into account the level of culpability on the part of the driver.

Fianna Fáil’s transport spokesman Marc MacSharry TD says Ross’s plans are “unworkable”. He said 35 per cent of speeding fines are not paid with €27 million outstanding as the Courts Service struggles with the volume of road traffic offences.

How will the new limits be enforced?

The Minister says enforcement is the next step. An Garda has told The Irish Times they believe the current speeding enforcement equipment used by gardaí and the privatised speed enforcement firm GoSafe is capable of being calibrated to enforce the new limits.

Will there be rows in court over 1km/h?

Certainly. A 1km/h variance can be the difference between being 29km/h or 30km/h over the limit. An Garda believes the existing equipment is robust enough to support prosecutions in court at such precise limits.

Interestingly, at the moment both An Garda and GoSafe often employ a small “shoulder” when enforcing a speed limit.

So they will enforce limits in an 80km/h zone from 84km/h or 85km/h and above. This is to make prosecutions more robust in court.

Do I feel a court challenge coming on?