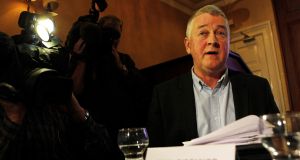 The Department of Foreign Affairs and Trade (DFAT) has defended its funding of the Derry-based human rights organisation the Pat Finucane Centre (PFC) after its director admitted he had been a member of the IRA in the early 1970s.

In a statement, it also said it expected that the staff of any organisation supported by it would “co-operate fully with any police investigation”.

He was responding to a number of allegations made in an online blog by the convicted IRA bomber Shane Paul O’Doherty, which included the claim that he had been involved in the death of a 16-year-old member of the IRA, Jim O’Hagan, in Derry in 1971. Mr O’Connor has rejected this, and said it was a “totally false story”.

The material is now under consideration by the Police Service of Northern Ireland (PSNI).

“We are aware of claims made in a blog published online earlier this month, and of subsequent press reporting in relation to those claims,” said Assistant Chief Constable George Clarke. “We will now consider them.”

The PFC represents families bereaved by the Troubles and has been involved in a number of high-profile campaigns on behalf of those killed and injured by the British state, as well as investigations into collusion between loyalist paramilitaries and state forces.

In a statement, the PFC said that “since 1980, Paul has lived openly in Derry. He has never been questioned by the RUC or PSNI about any matter relating to the death of James O’Hagan.

“It follows that he has never been charged or convicted of any troubles related offences.

“If at some point the PSNI choose to reopen the case of the killing of Jim O’Hagan and the investigators wish to speak to Paul, we would expect him to fully co-operate and to provide, if he has any, any information which he has.”

A spokesman for DFAT said its reconciliation fund provided €60,158 in grant support for the centre in 2019, primarily for its work in support of Justice for the Forgotten, which represents the victims of the 1974 Dublin and Monaghan bombings.

“We are satisfied that the programmes of the centre which have been supported by the department are in full compliance with the criteria of the reconciliation fund,” the spokesman said.

According to the department website, the reconciliation fund awards grants to “organisations working to build better relations within and between traditions in Northern Ireland, between North and South, and between Ireland and Britain.”

“The department supports groups from both communities who work to support victims of violence from the conflict and to build reconciliation including in some of the areas where the conflict was at its most intense and devastating,” the spokesman said.

Victims campaigner Alan McBride, whose wife Sharon was killed in the 1993 Shankill bombing, said there were “few in the victims sector that has [sic] done more to stand up for the needs of victims from all sides” and Mr O’Connor was a “true champion of those who have been hurt in the conflict”.