How the Troubles began: a timeline 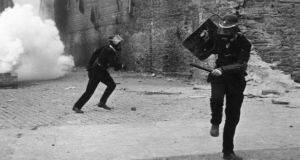 Police under attack during the civil rights demonstration in the Bogside area of Derry city. Photograph: Express Newspapers/Getty

How the Troubles broke out.

February 1967: The Northern Ireland Civil Rights Association (NICRA) is founded as a non-sectarian organisation to tackle the perceived bias of the Unionist majority government against the nationalist minority. They list six areas of reform of local government. The slogan “one man one vote” is born.

October 5th, 1968: NICRA and the Derry Housing Action Committee (DHAC) decide to hold a march to protest at housing in the city. The march is banned by the Stormont Government, but goes ahead anyway. The RUC baton charge protesters and the images of police violence are captured on television. Almost 100 protesters are injured.

December 9th, 1968: Northern Ireland premier Terence O’Neill defends reforms he is proposing in his famous televised Ulster “stands at the crossroad” speech. “What kind of Ulster do you want? A happy and respected province, in good standing with the rest of the United Kingdom? Or a place continually torn apart by riots and demonstrations, regarded by the rest of Britain as a political outcast?”

January 4th, 1969: The People’s Democracy movement organise a march from Belfast to Derry on New Year’s Day 1969. On the fourth day of the march at Burntollet Bridge outside Derry, the protesters are attacked with sticks and stones by a loyalist mob. The RUC stand by and watch.

April 19th, 1969: A rally at Derry’s Guildhall by nationalists is attacked by stone-throwing loyalists. The RUC intervene and follow the nationalist crowd back into the Bogside. RUC officers enter the home of Sammy Devanney in William Street and beat him and his family.

July 14th, 1969: Francis McCloskey dies after being beaten during a melee in Dungiven, Co Derry. Two days later Sammy Devenney dies in hospital of injuries he received from the RUC beating in April. Bogside residents vow not to allow the RUC into the Bogside again.

Monday, August 11th, 1969: The Northern Ireland cabinet meets in emergency session, but decides not to ban the Apprentice Boys parade for the following day. Residents of the Bogside work through the night to erect barriers.

Tuesday, August 12th, 1969: Clashes begin at 2.30pm in the afternoon as the Apprentice Boys parade ends. Petrol bombs are thrown at 4.40pm by nationalist protesters and the RUC responds with tear gas. RUC officers followed by loyalist protesters attempt to invade the Bogside leading to rioting which goes on all night. 112 people are taken to hospital, 91 policemen and 21 civilians are injured. In Strabane, a police station is stoned and a car set on fire in Coalisland.

Wednesday, August 13th, 1969: The rioting spreads to other parts of Northern Ireland including Belfast, Newry, Coalisland, Enniskillen, Lurgan, Omagh, Dungiven, Strabane and Dungannon. In Derry, fierce fighting continues in William Street and Little James’s Street. Nationalists in Derry call on nationalists elsewhere in Northern Ireland to rise and relieve the pressure on the Bogside.

In Belfast 500 nationalists gather at Divis Flats and march to two RUC stations where a group breaks off and attacks a station with stones and petrol bombs. The RUC send out the riot police and pitched battles go on all night.

Taoiseach Jack Lynch goes on television and makes his famous “not stand idly by” speech though this was a paraphrase. His exact quote was: “It is evident that the Stormont government is no longer in control of the situation. Indeed the present situation is the inevitable outcome of the policies pursued for decades by successive Stormont governments. It is clear, also, that the Irish government can no longer stand by and see innocent people injured and perhaps worse.”

The Irish army establishes four field hospitals - three in Donegal and one in Cavan. Lynch calls for a UN peacekeeping force for Northern Ireland are rejected by the British government.

Thursday, August 14th, 1969: The violence erupts into killings. Six people die in clashes, five in Belfast, including a child, and one in Armagh, 121 people are treated in hospital of whom 42 had been shot following gun battles between the RUC and the B Specials on the one side and nationalists on the other.

The Ulster Special Constabulary, better known as the B Specials, is called up. The wholly Protestant force numbers between 9,000 and 10,000 men. The Northern Ireland government calls in the British army who are deployed for the first time during the Troubles.

They move into Derry’s Bogside and are welcomed by beleaguered residents who regard it as a victory over the RUC and the B Specials. A ceasefire is called and the Battle of the Bogside is over.

British troops are also deployed in both the Falls Road and Shankill Road areas of Belfast where there are repeated clashes between Catholics and Protestants. Residents of the nationalist Falls Road clap when they enter Catholic areas. Their presence also brings a temporary calm to other parts of Belfast.

Clonard Monastery in Clonard Gardens come under attack from militant loyalists supported by Ian Paisley, but they are repulsed.

At least 25 families in Andersonstown are burnt out of their homes by Protestant gangs and similar number of families are left homeless on the Falls Road.

Friday, August 15th, 1969: The violence continues in Belfast with constant fire fights between nationalists and loyalists in west Belfast. Catholic workers stay away from Belfast’s dockyards, one of the main sources of employment in the city. Rioting spreads to East Belfast and houses and shops are set on fire. David Linton becomes the first Protestant civilian to die in the Troubles. He dies during disturbances in north Belfast. Teenager Gerald McAuley (15), a member of the Fíanna Éireann, the youth wing of the IRA, is killed during street disturbances in the Falls area of Dublin.

Saturday, August 16th, 1969: Violence spreads to both Dublin and London. A mob attacks the British Embassy in Dublin on the nights of August 16th and 17th. Sixteen garda are injured and at least 60 premises in the city centre are attacked and burnt.

A riot breaks out in London outside the Ulster Office in Berkeley Street where nationalist supporters clashed with the Metropolitan Police. Nine people are arrested and 45 people injured.

The number of civilians injured in Northern Ireland increases to more than 500 with 226 policemen treated for injuries.

Sunday, August 17th, 1969: Gunmen attack the South Armagh RUC station in Crossmaglen and a hand grenade is thrown. Pope Paul VI calls on Catholics and Protestants to recognise their common Christian heritage. He condemns the “bitter riots and harsh repression”.

Streams of refugees from nationalist areas of Belfast travel south. By Sunday evening 274 refugees from the North have entered Gormanstown army camp and 26 have gone to Finner Camp in Donegal. The Red Cross in Mullingar are looking after 51 Belfast families who had fled the fighting.