British policy on Brexit is part of an historical pattern, conference told

‘If Britain truly understood Northern Ireland would there have been a referendum in the first place?’ 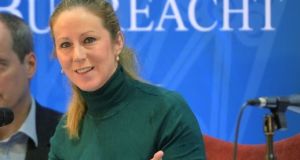 There was ‘a failure to appreciate how divisive and destabilising’ Brexit would be for Northern Ireland, said Prof Mary Murphy, of the Department of Government and Politics at UCC. File image: Alan Betson/The Irish Times

The UK’s decision to hold a referendum on Brexit with little thought to the consequences for Northern Ireland and Anglo-Irish relations follows a pattern where British political figures have exhibited a misunderstanding of Ireland and Northern Ireland, according to a leading academic.

Prof Mary Murphy, of the Department of Government and Politics at UCC, said that historically British prime ministers such as Ted Heath and Margaret Thatcher had demonstrated distorted understandings of Irish interests and motivations vis-à-vis Northern Ireland which infected the British-Irish relationship.

And the Brexit referendum pointed to a repeat of that pattern as Britain, having invested heavily in Northern Ireland during the peace process, had gradually disengaged over the past 20 years as the peace process settled into its own dynamic, she said.

“This [DISENGAGEMENT]reduced the ability of the British government to know, understand and appreciate what Brexit meant for Northern Ireland. It also meant the British government, and particularly Brexiteers, fundamentally misjudged the extent to which the border would become an issue during the Brexit negotiations.

“There was a failure to appreciate how divisive and destabilising the issue would be for Northern Ireland… I pose the question: If Britain truly understood the complexities of the relationship between these two islands, I wonder if there would have been a referendum in the first place?”

Speaking at the West Cork History Festival in Skibbeeen, Prof Murphy said the loss of trust between Britain and Ireland was perhaps the most troubling consequence of Brexit and both states and their peoples were the poorer as a consequence.

Prof Murphy, who holds a Jean Monnet Chair in European Integration, said the future for British-Irish relations was very difficult to predict.

“Once the UK departure process is complete, the relations between Ireland and Britain will require some new thinking about bilateralism as Britain assumes its place outside the EU and Ireland remains a member.

“Brexit has damaged British-Irish relations and, make no mistake about it, that damage will take some considerable time to repair. It will require strong political leadership, mutual respect and a shared purpose.”

Historian, Dr Ruth Dudley Edwards said she had reflected at length on the implications for Ireland before voting leave as she believed that the EU had become undemocratic and she did not like the way it treated it Greece. “I felt in the end to stay in was like being manacled to a dying person,” she said.

Speaking in a panel discussion, Dr Dudley Edwards said Taoiseach Leo Varadkar must be starting to question the wisdom of insisting on the backstop as it now looked like the withdrawal agreement provision, which was designed to avoid a hard border, could lead to one under a no-deal scenario.

Dr Dudley Edwards also suggested Brexit had undermined the cause of a united Ireland as it highlighted just how difficult it was to change the status quo. She pointed out that it had led Mr Varadkar to observe that it was too soon to be discussing such matters.

Historian Brendan Simms, Professor of the History of International Relations in Cambridge, also posited that Brexit, far from leading to a united Ireland, might actually have the opposite effect by increasing the political distance between unionists and nationalists as positions hardened over the issue of the backstop.

“I think if you have a hard Brexit, a united Ireland recedes as a possibility… the huge distrust we already have gets worse between north and south and, because after October 31st, there is prolonged confrontation between the UK and the European Union in which the Irish republic is on one side.

“I would like to know what the strategy is in Dublin after October 31st when there is no deal and no backstop. As I understand it, Leo Varadkar’s policy is there will be no trade deal until there is a backstop and that will deepen the divide between north and south and the divide between the UK and EU.”