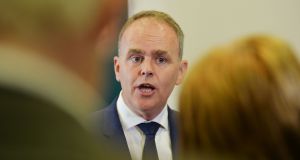 A formal loan scheme for third-level students will not be introduced and college fees will be frozen, the Government has pledged.

Minister for Education Joe McHugh said university registration fees will not go beyond €3,000 per year if Fine Gael is returned to Government after the next general election.

Meanwhile, Minister of State for Higher Education Mary Mitchell O’Connor said: “I am delighted that the announcement has finally been made that Fine Gael will not be introducing a student loan scheme.”

Ms Mitchell O’Connor said she could not have supported the introduction of a formal loan scheme for higher education students.

“We need to give our students the best possible start in their working life after graduation. Having to worry about crippling educational loan repayments, as well as rising rents and the cost of living is not the best way to start their working lives,” she said.

“According to the Financial Times, the average graduate in the UK from a three-year degree carries more than £50,000 sterling [€53,000] in debt and high interest fees. In the US, it is many multiples of this figure. We cannot burden our graduates by shackling them in chains of debt.”

Fianna Fáil TD and education spokesman Thomas Byrne said the promise to freeze fees was first made by his party at the last general election.

He said Mr McHugh needed to state fully how the Government planned to address the funding crisis in the third-level sector. “He has a responsibility to produce a comprehensive policy,” Mr Byrne said.

Mr Byrne said the budgets of third-level institutions had already been cut. “The Minister needs to flesh this out – he won’t get through an election campaign on sound bites alone.”