Homeowners could get €10,000 in State aid for green retrofitting 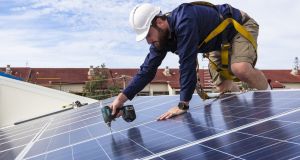 Denis Naughten says retrofitting “not just about the melting ice caps. This is about money in people’s pockets.” Photograph: iStock

The Minister for Climate Action and the Environment, Denis Naughten, has expressed concern at the impact climate change denial in the United States is having on consumer patterns here.

He said the policies of the Donald Trump administration would be “very disheartening” for consumers.

It made his job “much more difficult, because people are wary about putting a large amount of investment into something that has a long-term return, and now they are finding that one of the largest economies in the world is saying ‘This is all a figment of your imagination’, that there is nothing really happening, and there is nothing we can do to change that”.

Mr Naughten was speaking at the opening of the Sustainable Energy Authority of Ireland Energy Show in the RDS on Wednesday, where he announced details of a €5 million-a-year fund to help people to “deep retrofit” their homes.

The scheme will allow for grants of up to 50 per cent of the cost of a home energy project under the auspices of the SEAI. The cash aid from the State could be worth €10,000 to individual homeowners.

Mr Naughten accepted that more than money would be needed and he said he wanted to ensure the structures were in place for people to get the right advice on what would best suit their needs when it came to retrofitting.

He stressed that even people with limited budgets could use the new grants together with small borrowings to make their homes more energy-efficient and cheaper to run.

Against the backdrop of American president’s defence of the fossil fuel industry, he said there was a need to “change the language” on climate change and that consumers should be reminded that retrofitting was “not just about the melting ice caps. This is about money in people’s pockets.

“We can actually save families’ money by taking these measures, and taking the steps we can create a new dynamic in the economy that creates local jobs outside the major urban centres by going down this road, so it’s good for homes, it’s good for the local economy and by the way it’s also good for the environment.”

He added the European Union would “plough ahead” with its clean-energy policies “ in spite of what the US does”.

SEAI chief executive Jim Gannon accepted that the shifting of attitudes in the corridors of power in the US could knock consumer confidence in emerging technologies but he did not believe it would set back the advance of clean-energy technologies.

“Climate change is greater than one jurisdiction or one administration, and I think that, along with the speed bump we have seen recently, we have seen significant positives in that there are enough people to pick up the baton because it is a global problem and can only be solved globally.”

Part of the problem is technology is evolving the whole time, so what was a good investment two years ago is not a good lesson today,” he said.