Blaze destroys much of the roof, interior walls and furnishing of the building 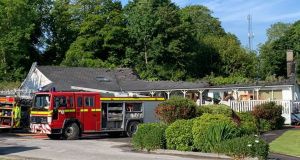 Gardaí and units of the Kerry Fire Service are at the scene this morning of a fire which broke out in the early hours at the historic Kenmare golf clubhouse.

There is widespread shock and sadness in Kenmare after a fire severely damaged the historic clubhouse at the Kenmare Golf cub.

Investigations are continuing into the cause of the fire in the early hours of Sunday.

It took several hours to bring the fire under control and by Sunday evening it was clear the building had been gutted in the blaze, with much of the roof, internal walls and furnishings destroyed.

The timber-framed building was empty and closed at the time of the fire. The golf club was founded in 1903 alongside the Great Southern Hotel.

The clubhouse was originally a cricket pavilion in use in the Punjab, India and was not installed in Kenmare until the 1930s and has been at the centre of much social activity in Kenmare since .

Garda forensics officers assisted by fire officers are carrying out an investigation into the cause of the fire.

A post by the Kenmare Golf Club on social media this morning expressed “shock” at the large fire and gratitude to the fire service from Killarney, Sneem and Kenmare.

Local councillor Patrick O’Connor-Scarteen (FG) said locals and visitors were shocked by this. He said the golf club was “at the heart of the town”.