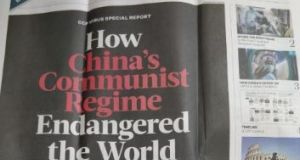 A copy of the Epoch Times that was distributed in Dublin

Copies of a controversial newspaper that urges people to refer to the new coronavirus as the “CCP virus” – after the Chinese Communist Party – were distributed for free to houses in Dublin at the weekend.

The special eight-page edition of the Epoch Times, with a front page that carries the headline “How China’s communist regime endangered the world”, has also been distributed in the US, Canada and Australia over recent weeks.

While the newspaper does not allege that the virus was manufactured by the Chinese regime, it does raise that issue as a possibility.

By far the majority opinion of the world’s scientists is that the virus came from bats and, by way of an intermediary host, developed the capacity to infect humans. This is believed to have happened in China, and possibly in or close to the city of Wuhan.

The newspaper says that among the reasons for calling the virus the CCP virus is to remind people that it is those countries with the closest links to the Beijing regime that are “the ones suffering the worst effects from this virus”, before going on to name-check Iran and Italy.

The Epoch Times is a well-funded media operation based in the US that has been associated with the spreading of conspiracy theories, support for US president Donald Trump, and the Falun Gong religious movement.

The NewsGuard Coronavirus Misinformation Tracking Center has identified Epoch Times web pages in the US, France and Germany as being involved in the spreading of misinformation about the virus.

The media group has been associated with support for nationalist movements in Europe, including the AfD in Germany, and the National Rally (previously the National Front) in France.

Last year Facebook banned the Epoch Times from advertising on its platform after it was found to have broken transparency rules on political advertising in relation to ads that were supportive of the US president.

In December the New York Times reported that Facebook had deleted hundreds of accounts that were linked to the Epoch Times and that used fake profile photographs that had been generated using artificial intelligence.

Soon afterwards the organisation shifted its advertising spending to YouTube.

In a statement on its website, the Epoch Times says the paper is telling people the blame for the pandemic lies with the CCP, not the Chinese people.

A member of the Chinese community in Dublin, who did not want to be named, said the Epoch Times was often handed out for free outside the Chinese embassy in Dublin.

The Chinese edition was also handed out in some city centre locations, the person said.