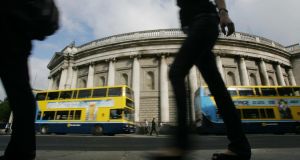 The proposed civic plaza on Dame Street in Dublin would create a “medium” security and terrorist risk for the city and would also drive shoppers out towards centres such as Dundrum, an oral hearing has heard.

Town planner Tom Phillips, representing retailers including Arnotts and Brown Thomas, told the Bord Pleanála hearing the project was like cutting off a key artery in a body.

People who could not make their way around the city or park their cars would say “hump that, I’m going to Dundrum”, he said.

Mr Phillips also lectures in UCD and is chair of Property Industry Ireland, a sectoral body within Ibec.

Dublin city was “the retail core of the nation”, he said. The retailers he represented were now “spectators” in what was happening to their city and not active participants in it.

There was a genuine concern that it was a fait accompli and that if the plan was not approved by An Bord Pleanála, the chief executive of Dublin City Council would use the Road Traffic Act to get the project through.

It appeared the council was using road traffic legislation as a substitute for proper planning, Mr Phillips said.

“I would say it’s a traffic management system with an ancillary civic space as a foil,” he said. “It’s a ban rather than a plan.”

He questioned, based on presentations by Dublin City Council to the hearing, whether this was the final scheme.

“And are we creating a rod to beat ourselves in terms of global terrorism and security, that we are creating . . . a space that will have a medium risk of terrorism? At the moment, it doesn’t.”

Richard Guiney, chief executive of the business representative group Dublin Town, said retailers were also suffering from the fact that about 17 per cent of non-food retail sales were now online and he said some estimates suggested this would grow to 30 per cent by the middle of the next decade.

He expressed concern about some aspects of the proposal, including the plan to move some bus stops to High Street, which was 530m from Grafton Street.

“We like the idea of the plaza. And I wish we could be endorsing it today, but there are practical implications we don’t think have been thought through,” he said.

Representatives of car park owners in the city sought that a number of conditions be applied to the project if it is approved by the board. This included that the council be required to designate adequate and sustainable routes to access car parks and also that the owners be compensated for any loss of revenue attributable to the restrictions brought in by the council.

But he expressed concern about people with visual impairments using guide dogs because of the lack of kerbing in the scheme. “Guide dogs need 60mm of kerbing to operate,” he said.

In a joint submission on behalf of the heritage group An Taisce, the Dublin Cycling Campaign and IrishCycle.com, Colm Ryder said the proposal would enhance the historic space around the Dame Street area. The groups supported the “broad thrust” of the scheme but some details were not acceptable and would have to be redesigned with priority given to walking and cycling.

Barrister Michael O’Donnell, instructed by Hanahoe Solicitors and acting for a number of businesses in the Parliament Street area, said if the scheme went wrong it would be “catastrophic”.

He said the effect of the proposed scheme on the street, including the “architectural gem” that was Sunlight Chambers (Hanahoe’s offices), would be “horrendous. If the city does not function as a city and if it does not function in terms of its transportation, the city will die,” he said.