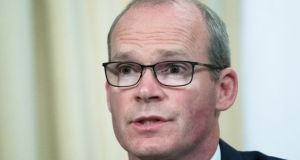 The wife of the Irish businessman who is barred from leaving China met with Minister for Foreign Affairs Simon Coveney but says she has had no further feedback since the initial meeting. Photograph: Pavel Golovkin/AP

The wife of a Dublin businessman barred from leaving China for 15 months has made a direct appeal to the Irish Government to intervene and push for his release.

Tara O’Halloran said her husband Richard has been largely confined to a hotel since an exit ban was imposed on him, the first of its kind in China against an Irish citizen.

Speaking publicly about her husband’s detention for the first time, Ms O’Halloran said he has been caught up in complicated events that pre-date his time in the aviation leasing company he works for. She fears for his physical and mental health, and the risks he faces during the coronavirus pandemic given that he suffers from a lung condition.

Mr O’Halloran has been blocked from leaving the country over an investigation into Chinese businessman Min Jiedong, owner of Dublin-based China International Aviation Leasing Service (CIALS), the firm the Irish man works for, concerning peer-to-peer lending and crowd-funding.

The authorities have accused Mr Min of illegally collecting money from the Chinese public in a crowd-funding scheme and using it to buy an aircraft, currently leased to an airline in Europe.

Mr O’Halloran, who joined the company a year after the events under investigation, travelled to China in February 2019 to meet investors and assess the problems facing the firm. After a week of meetings in Shanghai, he was detained at passport control at the airport as he tried to board his flight back to Dublin. He was later issued with an exit ban.

The businessman, a relative of former Fine Gael taoiseach Garret FitzGerald, has testified as a witness four times in the prosecution of Mr Min. However, he has not been permitted to leave China despite both the prosecutor and Mr Min telling the court he should be.

The Chinese authorities argue that Mr O’Halloran promised to transfer the aircraft and leasing revenues connected to the plane back to the Irish company’s Chinese parent but has not done so.

“Under this circumstance, Mr O’Halloran is restricted from leaving China by law,” the Chinese embassy in Dublin said in a statement.

The embassy said the Chinese police and court are “actively investigating and handling the case of CIALS in order to protect the property rights and interests of the victims involved in the case.

“It is hoped that Mr O’Halloran co-operates positively with the local authorities in Shanghai to bring this case to a successful conclusion at an early date,” it said.

Ms O’Halloran says her husband is being asked to do something he cannot do under Irish law. “It is not possible . . . it is entirely out of his hands.”

Ms O’Halloran says he has co-operated with the authorities in China and that it was “a matter for the authorities to bring matters to a speedy conclusion and to allow Richard to return home to his family”.

After an initial meeting with Tánaiste and Minister for Foreign Affairs Simon Coveney and contacts with his department, Ms O’Halloran says the family have had no further feedback.

“So far they have just paid lip service. My children want their dad back,” she says.

She has been frustrated seeing the department helping bring others home.

“With the Covid-19 pandemic, I see them repatriating everybody else from all over the world to come back to Ireland to be safe, yet they can’t get Richard home. He needs their help.”

A spokeswoman for the Department of Foreign Affairs said: “We are aware of the case and are providing consular assistance. We do not comment on the details of individual consular cases.”

Ms O’Halloran said her husband missed the death of her mother in January, “nearly two lots of birthdays” and other important family occasions.

His long absence has badly affected their four children, Ben (13), Amber (11), Isabella (eight) and Scarlett (six) who sleeps with a framed photo of her father.

“It is very difficult for them to understand because we don’t know when he is coming home or even if, at this stage,” she says.

Ms O’Halloran says her husband is permitted to leave his hotel but she fears the virus would “kill him” if he contracted it. He largely confines himself to his hotel room.

“It has definitely taken a huge toll mentally and emotionally. It is horrific.”