The World Health Organization's special envoy Dr David Nabarro has praised Ireland’s response to the coronavirus pandemic at a sitting of the Oireachtas special committee on Covid-19 saying "I do rate what you have done to a high level." 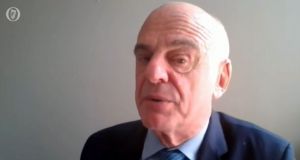 Ireland is at the “upper end of the spectrum” when it comes to deaths in nursing homes, a special envoy for the World Health Organisation has said.

Dr David Nabarro, the WHO’s envoy on Covid-19, also said it would be “reasonable” to make it compulsory for commuters to wear face masks on public transport.

“I do think we need to try and push from saying people ‘should’ do to people ‘really must’ do.”

He is appearing before the Dáil’s committee on Covid-19 and also said the number of deaths in residential care in Ireland was “quite high but not unexpected.”

Dr Nabarro said that “some countries were really not very comprehensive in their counting of the deaths in residential care and nursing homes.

“Ireland has probably got the widest circle of inclusion of all the countries I have studied, which may be one of the reasons why there is a relatively high rate of deaths in nursing homes associated with Covid in Ireland.”

He said there was a “very honest accounting of numbers” in Ireland.

On the issue of testing in residential care, Dr Nabarro said staff in nursing homes should know whether they had the virus and that meant virus testing at weekly intervals or possibly more often.

On the issue of face coverings, he said: “face coverings really are necessary because people may well be able to transmit the virus before they transmit symptoms of the disease. The use of face masks is important in situations where individuals are likely to be exposed to a lot of illness.”

He said people are more likely to wear masks if they are made available free of charge.

“I believe that the use of face protection is a part of emerging from lockdown and other stringent controls to be able to live with the virus.”

He said it is an area where there is a “massive area of disagreement.”

“You’ve got one group of people who say the science isn’t very strong plus if you have people wearing masks widely that will lead them to have a false sense of complacency. On the other side we have people, and I belong to that camp, who feel that this is a proper part of an overall strategy especially when people have to be close up.”

“Why do I feel like that, because I was working in South East Asia in 2003 and 2004 after the Sars outbreak and I saw the role that face protections had.”

Dr Nabarro was also questioned by TDs in relation to the two-metre social distancing guidelines amid pressure from industry groups, and particularly the hospitality sector, for it to be reduced to one metre.

“If you are going to see a reduction in the distance to one metre just bear in mind that if there is a prolonged exposure at shorter distances that really does greatly increase the risk.”

He also raised the prospect of diners wearing face masks in restaurants.

“I was saying to a colleague the other day that if they are going to open restaurants in France and have people indoors then the diners ought to be wearing masks to protect the waiters. My friend said no way that will ever happen.

“But from a logical point of view, being responsible, it is the people who service who we need to protect.

“It is about respect for those who service who often have no choice but to do the work because they are poor and suffered huge income losses due to lockdown.”

He said the “decent thing to do is wear a mask and protect the person serving you.”

Sinn Féin TD Matt Carthy pointed towards a recent debate in Ireland about eliminating the virus as opposed to suppressing it.

Dr Nabarro said ideally nations would try to completely suppress the virus but “the reality is that there is a lot of virus in the world.”

“Nations have to be able to connect with others for business as well for tourism and family connections. It is just not going to be possible to completely insulate Ireland, even if we look at the whole island of Ireland, south and north, without putting huge constraints on people and the economy.”

He also warned it could take up to three years to have a vaccine available to all who need it and said Covid-19 will be a continuous threat that we have to live with.

Fine Gael TD Colm Brophy said he had received a lot of queries about the idea of “air bridges” between countries and he questioned the safety of such a move.

“Is it safe for Irish people to travel to the Spains and Italys and then come back to their home countries if we are taking out the quarantine. Is that safe or is that an economic decision,” Mr Brophy said.

Dr Nabarro said what Mr Brophy was saying had “a lot of truth” to it. “There is inevitably personal and political pressure to reopen the tourism industry. Yes, there will be economic pressures for opening up all round.

“I am trying very hard not to say that this is wrong because I appreciate it. In the end, you are legislators and the authorities do have to weigh up the personal wish, economic issue and the health threat.”

“The only rationale basis for establishing air bridges is after a very careful and independent assessment of the risk in the different locations and trying to make absolutely certain that this is done fairly.”

He said it would be essential to ensure the risk levels between countries are compatible.

“It would be totally wrong if suddenly it turned out that there had been a mistake perhaps caused by ... economic pressure.”

He said he did not believe the two-week quarantine would “stick” in the coming months.

The special envoy also said that routine cancer screenings will “come good” in time. Routine screenings have been paused in Ireland.

“Whilst there might have been a cessation of screening or treatment procedures, after a month or two things have settled down and new systems have been developed. I would expect in places where cancer screening has stopped that over time there will be a sorting out.”

“It will come good, it will just take a little bit of time.”