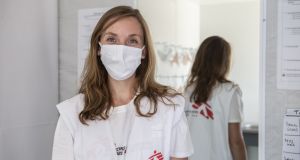 Irish staff working in Iraq and Greece with Médecins Sans Frontières (MSF) during the Covid-19 pandemic have warned of “potentially catastrophic” implications if the virus spreads into refugee camps.

In late March doctors from across Europe launched an appeal for the European Union to relocate vulnerable refugees from overcrowded camps, saying the situation could “escalate to a medical disaster”.

Dr Claire Dunne, who flew back to Ireland at the end of March after spending 10 months working with refugees on the island of Lesvos, returned to Greece in early May as part of MSF’s Covid-19 emergency response.

Before the pandemic Dr Dunne worked with survivors of torture and sexual violence. She also worked with children suffering from conditions related to living in the unhygienic and overcrowded setting of the island’s Moria refugee camp, including scabies, diarrhoea and respiratory infections as well as severe mental trauma.

“Before Covid hit things were already horrific in the camp with the lack of basic services and access to healthcare,” says Dr Dunne. “Covid has only made things worse with the restriction of movement in and out of the camp. The suffering of these people is very much being forgotten.”

When the virus first arrived in Europe, MSF called for the immediate evacuation of the most vulnerable people living in the camp. A small number have been moved from Moria – a camp built to house 3,000 people but currently home to more than 20,000 – but more than a thousand vulnerable people still need to be relocated, she says.

European governments should also take responsibility for the around 1,000 unaccompanied children living in the camp, says Dr Dunne who urged the Irish Government to honour its commitment to accept more than 250 children from Greece and Calais. “Every day they are losing their childhood and at risk of traumatic events, the scars of which they may have to carry for their entire lives.”

Last week, Minister for Justice Charlie Flanagan said eight unaccompanied minors would be brought to Ireland in the coming weeks from Greece. Some 112 young people had arrived in Ireland under the State’s refugee protection programme by the end of 2019.

“It’s extremely difficult if not impossible to implement the preventative measures advised for Covid-19,” says Dr Dunne. “It’s difficult to access water and soap; frequent hand washing is not an option for many. There are hundreds of elderly people with chronic lung disease and heart disease and diabetes in the camp with no way of socially distancing from others. We are still extremely concerned for that group.”

While no cases of Covid-19 have been confirmed in the camp, widespread testing is not taking place so it’s impossible to say for certain whether or not people have the virus.

In Iraq, where Alex Dunne has been working since last September, nearly 6,200 cases of the virus have been confirmed with 195 deaths and the majority of cases in the capital city of Baghdad. However, the actual number of cases is probably much higher, says Mr Dunne (no connection to Dr Dunne).

“There’s been no massive explosion of the disease in Iraq which was quite surprising to us. There’s certainly under-reporting. Patients may have the virus but choose not to travel to hospital.”

Some 4.1 million people in Iraq are in need of humanitarian assistance including 1.28 million internally displaced Iraqis who live in camps and another 247,000 Syrian refugees who also live in overcrowded camp settings.

MSF has permission from Iraqi authorities to transport medical staff and supplies during the country’s lockdown. However, most other humanitarian organisations are struggling to continue their operations, says Mr Dunne, MSF’s humanitarian officer in Iraq.

“Refugee camps need support with water and sanitation services but they can’t get those supplies to camps. They need to implement teaching and training on infection control and hygiene but without HR staff you have a really weak management system.”

People living in camps, many of who were displaced because of the Islamic State conflict, live in close proximity to one another in tents or prefabs, says Mr Dunne. “They’re in large family groups with poor hygiene and no real capacity to implement social distancing.

“If you fuse that with the breakdown in logistics and movement of medical cargo there’s no real feasible way in the current environment we could mount an adequate response to an outbreak.”

Working thousands of miles from home during the pandemic also carries a personal toll for aid workers, he admits. “It’s a combination of the uncertainty and anxiety of knowing that if anything happens to someone close to you can’t get home. I have a colleague whose father passed away and was unable to go home. That creates a lot of stress.”

*This article was amended on June 5th. A previous version stated that some 4.5 million Iraqis are internally displaced and living in camps while another 100,000 Syrian refugees also live in overcrowded camp settings. This has been corrected.

Angry Taoiseach calls for resumption of work on new National Children’s Hospital 17:56
Man tried to steal cars while high on crack and holding chihuahua 17:51
Coronavirus: One death, 25 new cases reported in State 17:49
Judge gives landlord a week to halt Covid-19 parties near UCC 17:32
Brightest comet of the century visible in Irish skies for the next week 17:09

1 Coronavirus: One death, 25 new cases reported in State
2 Children who go abroad must self-isolate for 14 days before return to school in September
3 Johnny Depp: Ex-wife or friend defecated in bed in ‘fitting end’ to marriage, court hears
4 Judge gives landlord a week to halt Covid-19 parties near UCC
5 The more London’s lockdown eases, the clearer the crisis becomes
Real news has value SUBSCRIBE