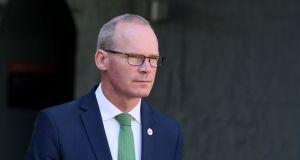 Minister for Foreign Affairs Simon Coveney arrives for the National Day of Commemoration ceremony in Dublin on Sunday. Mr Coveney has warned online platforms of their responsibility to police the “ever-evolving threat” of disinformation. Photograph: Brian Lawless/PA Wire

In his first public response to the allegations, Mr Coveney said they came from a “reputable organisation” and warned online platforms of their responsibility to police the “ever-evolving threat” of disinformation.

“The report concerns possible evidence of a disinformation campaign partly aimed at exacerbating divisions in Northern Ireland and is an issue which the relevant security services here will be appraising,” said the Tánaiste.

The Russian embassy in Dublin has flatly dismissed the report by the Digital Forensic Research Laboratory (DFRLab) at the Washington-based Atlantic Council think tank as “absolutely false”.

The DFRLab said last month it had uncovered during an investigation that Ireland was among several countries targeted by a Russian operation that used fake accounts and dozens of online platforms to spread fake news.

Facebook has shut down 16 fake accounts, including one purported Irish user, over recent weeks after finding “co-ordinated inauthentic behaviour” in a campaign that emanated from Russia.

The social media platform believes it to be the first disinformation campaign targeting divisions in Ireland.

It included the posting by a fake account, using an Irish name, of a fake email from DUP leader Arlene Foster to the EU’s chief Brexit negotiator, Michel Barnier, claiming that she favoured the EU’s stance on Brexit over the British Cabinet’s – a position that is significantly at odds with the DUP’s stated position.

Another post shared a forged tweet dating from March 2018 in which Britain’s then defence secretary, Gavin Williamson, claimed that the Real IRA had helped in the attempted assassination of Russian spy Sergei Skripal.

The Atlantic Council’s research centre said the campaign was “persistent, sophisticated and well-resourced” and that “the likelihood is that this operation was run by a Russian intelligence agency”.

It “appeared designed to stoke racial, religious or political hatred, especially in Northern Ireland”, it said.

Responding to the report, Mr Coveney said protecting democracies from disinformation was a major challenge and that Ireland was “fully engaged” with EU efforts to build a co-ordinated response to the threat.

“The fight against disinformation is a long-term challenge that concerns all parts of our societies and requires continuous commitment and efforts,” he said.

“The private sector, especially the online platforms, have a particular responsibility. Further proposals to strengthen our collective action in response to this ever-evolving threat are likely and Ireland will fully support any such actions once they align with our fundamental values, notably the right to freedom of expression.”

A spokesman for the DUP said it had “very limited detail” about the fake Foster-Barnier email but described it as “shocking” and said Ms Foster would comment on it “in due course when there is a more complete picture”.”

Mr Barnier’s negotiating team declined to comment specifically on the fake email but a spokesman for the team pointed to the European Commission’s recent efforts to “fight against disinformation” ahead of the European Parliament elections in May.

A spokeswoman for the Russian embassy in Dublin previously told The Irish Times the report by the Atlantic Council was “absolutely false”, “a complete fake” and had “nothing to do with reality”.

The Washington-based Atlantic Council has close ties to Nato countries and is supported with financial contributions from governments including the British Foreign and Commonwealth Office and the US department of defence, and from internet companies Facebook, a “partner” organisation of the council, and Twitter.

Facebook uses the Atlantic Council’s DFRLab as part of its investigations of foreign interference and shares information with the lab before taking down suspicious pages or accounts.