Undocumented immigrants in US on high alert as officials begin sweep 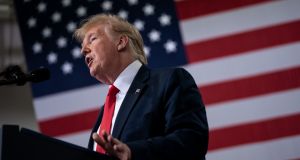 Undocumented immigrants across the United States were on high alert on Sunday night as immigration officials began a sweep on thousands of people living in the country illegally.

The new clampdown on immigrants by the Trump administration, initially planned for June but which began this weekend, is focusing on cities with high immigrant populations including New York, Chicago and Miami.

Among those who may be affected by the new clampdown are undocumented Irish people living in the US illegally.

The latest immigration push by US president Donald Trump took place as he posted a series of provocative tweets on Sunday, calling on four US congresswomen to “go back” to the “totally broken and crime-infested places from which they came”, adding: “you can’t leave fast enough”.

Though he did not mention them by name, Mr Trump was referring to four recently elected female members of Congress who have been at odds with house speaker Nancy Pelosi about Democratic party policy. They include New York-born Alexandria Ocasio-Cortez and Ilhan Omar of Minnesota, who moved to the US from Somalia as a child.

So interesting to see “Progressive” Democrat Congresswomen, who originally came from countries whose governments are a complete and total catastrophe, the worst, most corrupt and inept anywhere in the world (if they even have a functioning government at all), now loudly......

New York mayor Bill DeBlasio said that Immigration and Customs Enforcement (ICE) officers had mounted raids in the New York boroughs of Harlem and Brooklyn on Saturday night. No arrests were made. The acting head of ICE, Matthew Albence, confirmed targeted enforcement actions were taking place against specific individuals across the country, though he declined to discuss specific cases.

In most cities, there were few signs of large-scale operations, however. The mayor of Miami, Francis Suarez, said the city had “not seen a lot of movement”, as he pledged to protect the city’s undocumented immigrants. A Republican mayor, Mr Suarez is one of the few Republican local leaders to oppose the Trump administration’s immigration policy, noting that many of his city’s immigrants had “risked their lives to come here”.

The crackdown took place as Cork man Keith Byrne remained in Pike County Correctional Facility in Pennsylvania, after being arrested by immigration officers while on his way to work last Wednesday.

The 37 year old, who has been living in the US since 2007, was refused residency because of two charges related to cannabis possession dating from his time in Ireland. He is married to an American woman and the pair have children. Mr Byrne’s father, Jim, told The Irish Times his son declined to sign a waiver that would have seen him deported within 48 hours.

Billy Lawless, the Chicago-based senator with responsibility for the diaspora, said he was extremely concerned about the latest moves against immigrants in so-called sanctuary cities like Chicago: “We are advising people to stay low and be vigilant, and we are ready to give advice and support to those who need it.”

Mr Lawless claimed Irish undocumented people were in a more precarious legal position than immigrants who had recently arrived over the southern border mainly from central America.

“While most Irish undocumented arrived in the country legally and overstayed a visa, those coming over the border illegally are in fact entitled to legal representation and to a hearing,” he said. In contrast, undocumented residents who are picked up for visa violations are typically detained and deported immediately.