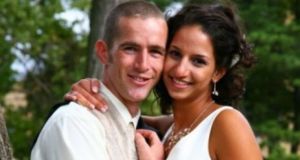 Keith Byrne with his wife Keran.

The American wife of an Irish man who has been threatened with deportation from the US has said it is “so unfair” that possession of marijuana for personal use charges from “many years ago” is halting his bid for citizenship.

Keran Byrne, wife of Keith Byrne (37) from Fermoy, Co Cork, who was arrested on his way to work on Wednesday morning in Philadelphia, told Newstalk Breakfast that her husband had gone through all the correct legal channels to adjust his status.

“He was never undocumented. He went through all the channels. He started the process in 2010 to adjust his status. The entire time he’s been here he has taken legal steps. He was legally allowed to stay here,” she said.

Ms Byrne said her husband was fined twice for possession of “a very small amount” of marijuana in Ireland in his early 20s. “Those little incidents have followed him here and destroyed his bid to become a citizen.

“It’s unfair that something so small should have an impact,” she added.

Ms Byrne said she has been contacting all her local congressmen asking them “to do something”.

The application of the law is “too black and white”, she said. “He is in a grey area.” Each case should be taken individually but everyone “is being lumped together.”

The couple’s three children are all heartbroken and sad and “need their dad back,” she said.

Mr Byrne’s family say he has been living and working legally in the US since 2007 but lost a recent appeal against a refusal to grant him residency because of the two separate charges of personal use of cannabis on his record from when he was younger in Ireland.

His family contend that he was never an undocumented immigrant, and when his visa expired he alerted authorities with a view to regularising his situation.

She said her brother had provided all his information and ICE agents knew where he lived because he had started the process of applying for citizenship.

Mr Byrne’s arrest while on his way to work in Philadelphia last week came as a shock to him and his family as he had been “making applications and appeals”, she told RTÉ’s Morning Ireland on Monday.

“He was not illegal, he was a documented individual. He had a social security number, a driving licence. He paid tax. So to be included as an illegal immigrant is incorrect,” she said.

“He was legal, but did not have citizenship. He was not in hiding.”

She explained Mr Byrne had gone to the US on a holiday and met Keran, who was to become his wife, before he came home and decided to stay. In 2010 he made his application for citizenship.

“He did everything by the book. Now his world is turned upside down. His life is in America.

“He is unfortunate to be caught up in the current administration and their clampdown,” she added.

Immigration lawyer James O’Malley, who is originally from Limerick but is now based in New York, said that under the Esta visitor visa system, if a person overstays they automatically waive the right to challenge the deportation system.

“The system is quite harsh. This administration is hell bent on making a statement on this issue. They are cavalier and unrealistic to say that millions will be deported,” he said.

Undocumented immigrants across the United States are on high alert as immigration officials began a sweep on thousands of people living in the country illegally.

The new clampdown on immigrants by the Trump administration, initially planned for June but which began last weekend, is focusing on cities with high immigrant populations including New York, Chicago and Miami.