Taoiseach is confident of abortion reform ‘within months’

Leo Varadkar says the referendum is a question of trusting women 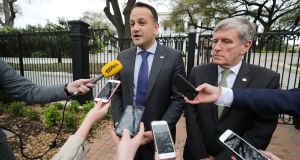 Taoiseach Leo Varadkar and Ambassador to the US Dan Mulhall speak to the media after a meeting with Texas governor Greg Abbott in Austin. Photograph: Niall Carson/PA Wire

Taoiseach Leo Varadkar has said he is confident legislation to reform the State’s abortion laws will be in place by the end of this year.

Mr Varadkar, who is favour of repealing the Eighth Amendment and allowing for terminations up to 12 weeks, expressed confidence the referendum on the matter will be held by May and said new legislation could be in place within a matter of months.

Speaking in Texas, in the US, Mr Varadkar said: “When I was elected as Taoiseach back in June . . . I gave every minister two or three things to focus on and one of the things that I gave the Minister for Health to focus on was having a referendum this year, ideally by the summer.

“Notwithstanding a few delays along the way, we are actually on track – the legislation is now in the Dáil and I am confident that we can have [a] referendum in May and that would allow us to get legislation through within a matter of months.”

Legislation would only be required in the event the electorate votes in favour of the Eighth Amendment being removed from the Constitution. If the referendum fails, no such laws will be required.

Mr Varadkar acknowledged the referendum will be tough, but insisted this was a question of trusting women.

Asked about the part Catholicism plays in the debate in Ireland, he said: “A big part of the Christian faith is conscience and compassion, I think a lot of committed Catholics will vote ‘Yes’.”

Meanwhile, Minister for Health Simon Harris has called on political leaders in favour of repeal to form a cross-party group ahead of the referendum campaign.

Mr Harris said he was willing to work with “anyone and everyone” to ensure the Eighth Amendment, also known as Article 40.3.3 of the Constitution, is removed.

Leaders of the three main political parties have stated they are in favour of repealing the Eighth and allowing for abortion up to the 12th week of pregnancy.

Mr Harris told The Irish Times: “Politicians in favour of change need to work together to ensure the current situation comes to an end, where we ignore the thousands of women travelling to the United Kingdom every year.”

However, Independent TD Mattie McGrath has insisted the Eighth Amendment is the only remaining constitutional protection for the unborn and must be preserved.

Mr McGrath also accused the Government of rushing through legislation to allow for a referendum, insisting that TDs have not been given proper time to scrutinise the Bill.

If the referendum is passed and legislation is required, it is understood the Medical Council will be asked to draw up guidelines to assist medical professionals.