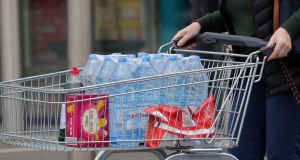 A boil water notice has been lifted for some 600,000 people in the greater Dublin area.

The announcement on Friday evening followed a meeting between the HSE, Irish Water and Fingal County Council regarding the supply from Leixlip Water Treatment Plant.

Irish Water said the results for two water samples were received on Friday afternoon and were satisfactory.

The “boil water” warning notice was put in place on Tuesday at 11am after a mechanical issue at the Leixlip treatment plant first caused concerns about the quality of supply.

Minister for Housing, Planning and Local Government Eoghan Murphy welcomed the lifting of the boil water notice. However, he said he was “extremely concerned” to discover that the Environmental Protection Agency (EPA) found no system in place to respond adequately to process alarms at the water treatment plant.

The EPA’s final audit report will be published in the coming days. Mr Murphy stressed that Irish Water must now work with Fingal County Council to ensure there is no repeat of this type of incident.

“Once I have the EPA’s final report, due in the coming days, I will be meeting directly with the managing director of Irish Water and chief executive of Fingal County Council,” he said.

Boil Water Notice for customers supplied by the Leixlip Water Treatment Plant has been lifted with immediate effect. We are grateful to our partners in @Fingalcoco who worked with us to provide all necessary detail to the HSE & EPA to facilitate the lifting of this notice. pic.twitter.com/WlipJSCoQg

The EPA has verified that Irish Water and Fingal County Council have, in the wake of the incident, already implemented the necessary automatic plant shutdown systems.

The initial problem was as a result of the disinfectant process for the water at the Leixlip plant being compromised.

Subsequent water sample tests were found to be “satisfactory”, according to Irish Water, although the boil water status was retained as a precaution.

Yvonne Harris, head of customer operations for Irish Water, said: “Irish Water acknowledge and understand the impact of this boil water notice on the 600,000 people affected and we sincerely regret the inconvenience.”

“We endeavoured to keep the public up to date at every stage and we are grateful to the media, elected representatives and members of the public who shared the information on social media and who supported family, friends and neighbours,” she said.

Following disruption for a number of days, businesses will be keen to see normal services resume for the bank holiday weekend.

Those in the areas affected by the boil water notice could only use boiled or bottled water for drinking and in food preparation.

There was a run on bottled water in shops and supermarkets with many places selling out.

The end of the “boil water” notice will come as a relief to small businesses in the affected area.

Many restaurants and coffee shops were forced to pay for additional bottled drinking water and commercial water rates at the same time.

The Restaurant Association of Ireland called on Irish Water to refund restaurants commercial water rates for the days of the notice.

Many coffee shops also faced difficulties given that their machines do not bring the water to boiling point. They had to pre-boil water to make it safe for use.