Essex: Truck driver’s detention extended as postmortems on victims due 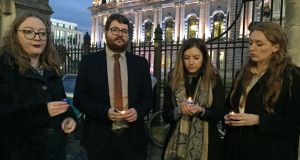 People take part in a vigil outside Belfast City Hall for the 39 people found dead inside a lorry in Essex on Wednesday. Photograph: David Young/PA Wire

Essex Police were on Thursday night continuing to hold a Northern Irish truck driver for questioning on suspicion of the murder of 39 Chinese people found dead in a refrigerated trailer he had collected.

The suspect, a 25-year-old from Co Armagh, had his period of detention extended by a further 24 hours on Thursday, which is a procedural formality in the investigation of serious offences.

Essex Police chief constable BJ Harrington said he had “the utmost confidence” in his staff carrying out what was a complex inquiry.

“This is the largest investigation of its kind Essex Police has ever had to conduct and it is likely to take some considerable time to come to a conclusion,” he said.

The inquiry would be conducted in a manner that afforded respect and dignity to the men and women who had died, all of whom were believed to be Chinese.

Last night the remains of 11 victims were taken from Tilbury Docks to Broomfield Hospital in Chelmsford, where postmortems were due to begin.

The results of some of those examinations, which could be available to Essex Police as early as Friday, will determine the causes of death and also how long the eight women and 31 men had been dead before the alarm was raised.

The timeframe of the deaths, combined with GPS tracking data from the refrigerated trailer, may offer a strong indication where the trailer was when the victims died. That information may also help indicate when and where they got into the trailer.

Three addresses in Armagh linked to the Northern Irish truck driver being detained in connection with the matter have been searched by the Police Service of Northern Ireland at the request of Essex Police.

The arrested driver left Ireland last Sunday on the Dublin Port to Holyhead ferry. He collected the refrigerated trailer from Purfleet ferry terminal in Essex, driving away with the trailer in tow just after 1am.

The driver then pulled over at a roadside minutes later at the nearby Waterglade Industrial Park, Grays, Essex, where he opened the truck and found the bodies. The driver is then believed to have alerted the emergency services himself.

After paramedics attended and assessed the scene they contacted Essex Police at about 1.40am. The driver was arrested and the truck and trailer, with the bodies inside, were left in situ overnight into Wednesday morning.

After being examined by police, crime scene investigators and pathology staff on Wednesday, the truck was driven away to Tilbury where further examinations were carried out.

Police on Thursday said those who died were from China and the investigation will focus on whether the victims had assistance in getting into the trailer and, if so, who was involved.

Councillors in Grays have opened a book of condolence as a small crowd of people held lit candles at the front of Belfast’s City Hall as a mark of respect for those who lost their lives.

Vicar Charlie Kosla, from St Peter and St Paul’s church in Grays, said it was a “dreadful” incident. He said people in the community have spoken to him about their shock and sadness following the discovery.

“It reflects on people’s desperation but also it is horrifying that people, we presume, are making a lot of money out of this,” he said of the deaths in the container.