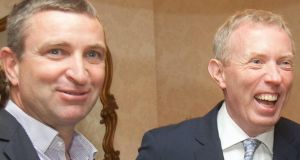 Niall Collins TD and Timmy Dooley: If it is found they have breached ethics laws, the Dáil’s committee could recommend a suspension for up to 30 days. Photograph: Gareth Chaney Collins

Fianna Fáil’s Niall Collins and Timmy Dooley have been criticised by Government and Opposition TDs over statements they gave to an inquiry into the Dáil voting controversy, with one deputy claiming their stories “do not stand up”.

The two men have been removed from their positions on the party’s frontbench over Mr Collins last week voting six times on behalf of Mr Dooley, who was absent from the House at the time.

In a report compiled by the clerk of the Dáil, released on Thursday, Mr Dooley denied asking his colleague to vote for him and Mr Collins denied being asked to cast the votes.

Ceann Comhairle Sean Ó’Fearghaíl said the facts as laid out in the report were “stark” and “unpalatable”. While the report made no findings against any individual, the Dáil’s ethics committee is expected to meet next week to consider a complaint made by Fine Gael TD Noel Rock on the issue.

If it is found the TDs have breached ethics laws, the committee could recommend sanctions including a suspension for up to 30 days.

Video footage of the vote in question showed that before Mr Dooley left the chamber, he pointed towards the front row of the seats at which point Mr Collins nodded.

“When asked what he meant by pointing at the seats, Deputy Dooley was indicating to Deputy Collins that he would see Deputy Collins when they were voting,” the report states. Mr Collins said he did not know what was meant by the pointing because he was looking at Mr Dooley’s face and not his hands.

Fine Gael parliamentary party chairman Martin Heydon said that “there are many people outside this House who would find it difficult to believe many of the accounts included in the report”.

Sinn Féin leader Mary Lou McDonald said “both deputies claim they acted on their own initiative and that they were not requested or coerced to vote for other colleagues.

“This stretches political credibility, particularly in the case of Deputies Niall Collins and Dooley, as video footage strongly suggests an exchange relating to votes took place.”

Rise TD Paul Murphy said he “did not buy” the statements. “There is a real problem with that story based on the evidence given to the review.”

Social Democrats co-leader Catherine Murphy said, “We are being taken for fools with the story. It does not stand up. It is not a question of brazening it out. If there is to be integrity in this process, one should fess up. That is what is needed.”

Mr Dooley and Mr Collins apologised to the Dáil for their role in the controversy, as did the party’s Brexit spokeswoman Lisa Chambers and public expenditure spokesman Barry Cowen.

Ms Chambers said that she made a “genuine mistake” by inadvertently sitting in the wrong seat in the chamber and pressing the button in error while Mr Cowen also apologised for not voting in his designated seat.