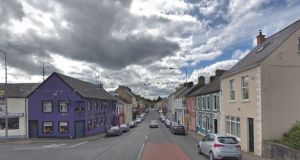 Some people in Ballinamore are opposed to plans to move up to 130 asylum seekers to the town. Photograph: Google Streetview

The Department of Justice has declined to say if its plans to accommodate up to 130 asylum seekers in Ballinamore, Co Leitrim have been paused, as claimed by representatives from the community following a meeting this week.

Minister of State for Integration David Stanton held talks with people from Ballinamore and local politicians on Thursday to discuss the plan, which has prompted around the clock protests in the town.

After the meeting, the community group’s spokesman Gordon Hughes said Mr Stanton had given them assurances the move would be “paused” pending further consideration.

Asked to confirm this on Friday, the department issued a statement saying: “Minister Stanton welcomed the opportunity to have an exchange of views with elected and community representatives from Ballinamore yesterday.

“He will reflect on issues discussed and is looking forward to further dialogue taking place.”

The department previously said it had reached agreement with a provider in Ballinamore to provide accommodation for up to 130 asylum seekers in the town. The plan is to accommodate them in 25 apartments at The Rock, a development just outside the town centre, which is where the protests have been taking place.

Some residents have expressed concern about the lack of consultation on the move and argue that Ballinamore, a town of 900 people, does not have the facilities to accommodate such an increase in its population. They have denied that the community is not open to asylum seekers and say they would welcome more residents, but on a level proportionate to the town and its services.

“Ballinamore has had an asylum centre before; we understand the pros and cons,” said Mr Hughes, a local auctioneer. He said some residents of the former centre settled in the town and believed the direct provision model did not work.

“It’s about social infrastructure. We have one GP,” he said. “Do it on a proportional basis.”

While community representatives say they wish to work with the department, Mr Hughes was reluctant to set out what arrangements local people would accept. However, he said international norms for settlement were at about 1 to 2 per cent of a local population, rather than the 15 per cent the number proposed would represent.

There has been a series of recent cases of communities opposing plans for direct provision centres in places including Oughterard in Co Galway and Rooskey on the Leitrim-Roscommon border.

It is understood that Mr Stanton told the Ballinamore group that apartments where families could support each other while living independently were considered a better option than direct provision centres, which campaigners have criticised for being inhumane.

The Ballinamore group say their demonstration will continue “until such time as this is successfully resolved”.

Sinn Féin TD for Sligo-Leitrim Martin Kenny, who has criticised “fearing mongering” and the whipping up of hysteria over asylum seekers in Ballinamore, on Friday said he had received a death threat in the wake of the controversy.

He said he had reported the threat to gardaí but was not taking it too seriously .

“I expect someone who is going to do something does not text you first to tell you they are going to do it,” he said.

Speaking in the Dáil on Thursday, Mr Kenny said far-right speech and tone had “taken root among people who would otherwise be decent and reasonable”. He said the genuine concerns that people have about education or health services being stretched when it comes to asylum seekers arriving “are being twisted into reasons to be empowered”.

Tánaiste Simon Coveney paid tribute to Mr Kenny for the stand he was taking in relation to Ballinamore and said elected representatives had a duty to stand firm and “educate and convince people of the dangers of that indirect prejudice and what it produces”.

1 Coronavirus: What we know so far about how Ireland is affected
2 Mass gatherings due to go ahead in Ireland amid coronavirus outbreak
3 Cancellations and confusion as coronavirus threat edges closer
4 Stormont finance minister told at Sinn Féin rally he has nothing to apologise for
5 ‘Several killed’ in shooting at Milwaukee brewing company
Real news has value SUBSCRIBE