Miriam Lord: The pressing mystery of the Four Buttoneers

Dáil makes a meal of latest shambles to darken its democratic, buttoned-up world 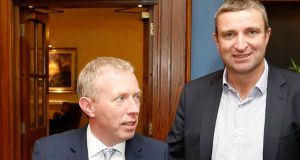 Timmy Dooley and Niall Collins: gave grovelling apologies when hauled up to account for their button-pushing blunders. Photograph: Sasko Lazarov/RollingNews.ie

Officer Martin Heydon of the TDPD paced the floor, notebook in hand.

“Over a period of 56 minutes, eight votes were taken in the Dáil. Deputy Timmy Dooley left the Chamber one minute after the first vote was called but nine minutes before the first vote took place.”

Officer Heydon stopped in his tracks and fixed the furtive-looking Fianna Fáilers with an icy stare.

It was like amateur hour at a television detective convention when members of the Dáil gathered to consider the terrible crime committed under their noses last week and express horror at the fact the perpetrators came from within their ranks.

As for the guilty, they ‘fessed up because they were caught bang to rights. They went quietly, but their boss sprayed the joint with a hail of resentment before his boys and their paper-thin excuses were taken down.

In one of the most self-indulgent 80 minutes of huffing and puffing in recent Dáil history, the three largest parties made quite a meal out of the latest shambles to darken their world.

A full hour and 20 minutes devoted to talking about themselves on Thursday, with more passion and attention and attendance than witnessed at what should have been the biggest Dáil event of the week – the Taoiseach’s formal State apology to victims of the cervical cancer debacle.

Two Fianna Fáil TDs were rumbled breaking the voting rules – Timmy Dooley wasn’t in Leinster House while eight votes were being taken in succession but his colleague Niall Collins voted for him (and himself) in his absence.

All a big misunderstanding, they insist. But nonetheless they gave grovelling apologies when hauled up to account for their button-pushing blunders in the chamber. Two more Fianna Fáil TDs – Lisa Chambers and Barry Cowen – were found also to have transgressed, but to a lesser degree. They too stood up and said they were sorry.

But you could feel the seething indignation radiating from their side of the House as Fine Gael and Sinn Féin fell over themselves to express their disappointment at the terrible damage they had done to the corporate reputation of all who toil in parliament. Of course, they spoke more in sadness and disappointment than in unbridled glee, which has been unconfined all week in the corridors, corners and their party rooms.

The apologies came at the end of a string of statements on the outrage. Micheál Martin and his crestfallen Buttoneers had to sit and take it for the most part. But not before the Fianna Fáil leader made a speech accepting responsibility for the actions of his TDs while lambasting the other two parties for hypocrisy, vindictiveness and triumphal point-scoring.

The Government Chief Whip, Seán Kyne, opened proceedings by giving a comprehensive rundown of why what Timmy, Niall and the other pair did was “entirely wrong”.

This was on a different level “completely and utterly” to the unacceptable practice of voting for colleagues within eye contact in the locked chamber. Which is what some Government members have done.

Fine Gael chairman Martin Heydon carried on the baton with his questions about the credibility of exculpatory statements made by Dooley and Collins to an Oireachtas inquiry.

“I believe the facts leave a number of unanswered questions,” he said, sounding like a poor man’s Poirot as he tried to nail the two miscreants with the evidence.

The more he went on, the more it sounded like we should have been gathered in the library with the corpse of Dáil credibility lying on the carpet beside a bloodied candlestick.

The Opposition was behaving badly, he felt.

“Get to the issues, Micheál,” drawled Eoghan Murphy from the Cabinet benches. “I think the heckling reinforces my point,” sniffed the FF leader, while tearing strips off Fine Gael and Sinn Féin.

“Not everyone has been at it,” said Mary Lou McDonald. “Named and identified Fianna Fáil TDs have been at it.” Sinn Féin’s David Cullinane took over from his party leader, describing Micheál’s speech as “partisan, defensive and quite disgraceful”.

“You’d be outraged if it was another party,” he said to him, outraged.

He would have a few things to say to Deputy Dooley too, but he “isn’t here”.

But Timmy was there. Only in the wrong seat, looking wretched.

We must not prejudice ourselves, quivered Labour leader Brendan Howlin, because they will be investigating themselves again once next week’s investigation is finished.

The whole affair “has cast a cloud over our democratic prerogative” he cried, saying the scandal reduced the parliamentary party week to a “slug-fest”.

Which is no way to describe his fellow TDs.

Then Brendan produced the “fob” deputies use for signing into the Dáil and said he’s been privileged to represent Wexford since 1798. Or something like that.

Like Heydon and Cullinane before him, Paul Murphy of Rise rose. “I now want to go over some details.” How come Collins only voted six times on the double when he could have done it eight times? He had lots of questions.

“Many countries around the world are on fire because of the lack of democracy, including Hong Kong, Lebanon, Chile, Peru and Catalonia – and that is to mention just a few.”

Meanwhile, Catherine Connolly said she only got three minutes earlier in the day to talk about the 38 people on hospital trolleys in Galway. “I’ve more time to talk about this.”

She was finding it hard to heed the Ceann Comhairle appeals for respect having listened to Fianna Fáil and Fine Gael on the voting problems. FG was using the situation “as a Star Chamber to score points and Fianna Fáil has been disgraceful. The speech from Deputy Micheál Martin was simply disgraceful.”

He should have owned up, apologised and moved on.

She had no trouble believing Niall Collins only voted twice on six occasions – he was probably too exhausted to make the full eight.

Micheál, for his part, said Dooley and Collins would remain suspended from his front bench. Judging by his expression, preferably by their toenails.

On and on they talked – the Independents and smaller parties striking a less partisan tone.

Finally, the Four Buttoneers got a chance to read their apologies. Chambers and Cowen were short and sour. As for Timmy, he was sorry for giving the wrong impression to Niall that he was in the chamber when he wasn’t. And Niall was very sorry too for getting a bit mixed up.

They saw nothing, heard nothing, said nothing, went nowhere, sat somewhere. When Timmy pointed to the voting machine when talking to Niall before he left, what was that all about?

“I’ve no idea,” Niall told the investigation. “I was looking at his face and not his hands.”

Willie O’Dea, was in the thick of it but heard nothing.

Is there anything to be said for another tribunal?