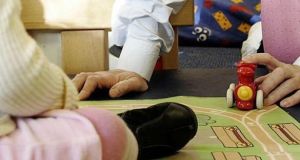 The Government must now go back to the drawing board on childcare, the Irish Nurses and Midwives Organisation (INMO) has said. Photograph: Edmond Terakopian/ PA Wire

The Government must now go back to the drawing board on childcare, the Irish Nurses and Midwives Organisation (INMO) has said.

A scheme to offer childcare to frontline workers has been scrapped after only six providers applied to participate.

Minister for Children and Youth Affairs Dr Katherine Zappone announced the cancellation of the scheme on Wednesday evening, which would have seen childcare workers coming into the homes of healthcare workers to look after their children.

Concerns about infection risk and insurance issues were among the reasons cited for the low uptake of the scheme, which had due to begin on Monday.

Phil Ní Sheaghdha, general secretary of the INMO, said if the Government wants as many frontline nurses and midwives at work “they will have to offer an additional scheme to make it practical”.

“The government must go back to the drawing board. Everyone wants to see a successful scheme, so we will be engaging constructively with the government to get this sorted,” she said.

“A key lesson from this process is that there should be constant engagement with unions and stakeholders in the design of these schemes.

“Until then, nurses and midwives with childcare difficulties can expect maximum flexibility to allow them to attend work. Should that fail, they can remain home, awaiting remote work, with full pay. This was negotiated between unions and employers in the past weeks.

Ms Ní Sheaghdha has called for funds originally allocated for the scheme to be reallocated to those paying “over and above” rates for childcare.

One nurse had been charged €110 per day to cover her 12 hour shift, Ms Ní Sheaghdha told Newstalk Breakfast on Thursday. Others had organised for family members to move into their home, to become part of their household, so they could look after their children.

Public service union Fórsa said the Government had “let health workers down” on childcare and must now commit to refunding additional childcare costs they have incurred since schools and creches closed.

“It’s now nine weeks since schools and creches were closed. At that time, the Government promised that it would help essential health workers, thousands of whom have since incurred massive additional childcare costs in order to continue serving the public,” a spokesman said.

“The only practical solution now – to do right by staff and maximise the numbers available in our hospitals and community health settings – is for the Government to agree to meet the additional costs that essential health workers have incurred.

Labour’s justice, children and youth affairs spokesman Sean Sherlock said the terms of the scheme “left too many questions unanswered”.

“This puts the other stages of opening up childcare for families in jeopardy. If there is no certainty now how can there be certainty before June 8th and then for June 29th. This is deeply disappointing for working parents and puts working mothers in particular under further strain,” Mr Sherlock said.

“It’s a regressive social step and will plunge women backwards. The Taoiseach needs to take ownership of this issue now. It requires political leadership at the highest level. The government can’t keep stringing parents and providers along.’’

Sinn Féin leader Mary Lou McDonald said the Government would have to indemnify childcare providers to ensure that access to childcare was guaranteed and provided to workers on the frontline during the pandemic.

Nobody could provide a figure outlining how much this will cost, if insurance was called on, she told RTÉ’s Today programme on Thursday. She said the first proposal to provide childcare solutions had fallen flat on its face and something needed to be done. “That was the responsible thing to do,” she said.

Ms McDonald said that this was not the first time there had been issues with insurance and childcare providers, and it was worrying that it was rearing its head again. Schools in Northern Ireland had remained open for children of frontline workers, she said.

Early Childhood Ireland has warned that if a decision is made to limit the numbers of children who can return to creches, it would have a “dreadful knock-on effect” on staff retention.

Frances Bryne, director of policy and advocacy at the organisation, said it is “absolutely critical” that the National Public Health Emergency Team provide clarity about public health implications for creches as they reopen, such as whether ratios of staff to children would change and if it would be necessary to limit numbers.

This clarity will help proprietors to make decisions about staffing and funding, Ms Byrne said.

Karen Clince, chief executive of Tigers Childcare, which employs 183 staff, said the Government must “think outside the box” to bring back childcare services.

Ms Clince has proposed there should be “hubbed” groups within specific rooms and no crossover of staff. It would be wrong to bring children back and to expect them to adhere to social distancing, to “not allow them to be normal,” she told RTÉ’s Morning Ireland.