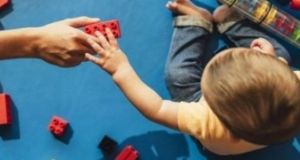 The provision of childcare for essential health workers has been a major issue for staff and trade unions over recent weeks since the closure of schools and creches. Photograph: iStock

A scheme to provide temporary childcare for essential healthcare workers has been cancelled when only six providers volunteered to participate in it.

The scheme was set up in response to requests from those who were being asked to work long hours on the frontline with nobody at home to mind their children.

The provision of childcare for essential health workers has been a major issue for staff and trade unions over recent weeks since the closure of schools and creches.

A HSE survey last month indicated that up to 8,000 staff either had or forecast they would soon have childcare difficulties.

The scheme was designed in response to a request from the Department of Health and the HSE to put emergency childcare in place for essential health workers.

It envisaged childcare practitioners working on an outreach basis in the homes of health workers, with childcare providers and their staff being paid for the service.

The funding allowed for payment of an average wage of €15 per hour for childcare practitioners, in addition to associated employer costs, as well as a management overhead to provide for supervision and support.

The service was expected to cost about €4.7 million per week and could cover 5,000 families. In a statement the Department of Children and Youth Affairs said a fear of getting an infection, fears over insurance cover and difficulties in meeting employer responsibilities in relation to breaks and rest periods may be responsible for the low take-up of the scheme.

The Department also acknowledged that many of the 27,000 mostly women involved in professional childcare themselves had issues looking after their own children because of the closure of schools and creches.

“The Minister noted that the challenge of introducing childcare provision at this time is a difficult one given the important public health restrictions in place,” it said in a statement.

“While the home based approach met public health requirements, the provision of this type of model raised other difficulties, and the sector were concerned generally about potential health impacts amidst continued strict social distancing rules.

“The Minister acknowledged the efforts both within her own Department and externally to get the scheme up and running. She had sincerely hoped that it would be possible to deliver such a scheme successfully and so ease some of the burden on our frontline health workers. Unfortunately this has not proved to be the case.”

1 Black Lives Matter protest planned for Dublin is cancelled
2 With Lincoln looking on, the crowd dropped to their knees as 7pm approached
3 Luke ‘Ming’ Flanagan bares his bottom half to European Parliament
4 Covid-19: Harris urges people not to think it’s ‘mission accomplished’ ahead of next phase
5 Trinity College Dublin to resume with as much face-to-face teaching as possible
Real news has value SUBSCRIBE