Covid-19: Testing and tracing delays will not defer lifting of restrictions, says Holohan 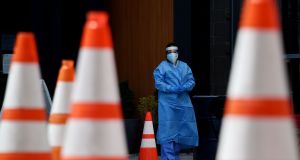 Delays in the testing and tracing system for Covid-19 will not affect the decision on whether to ease lockdown restrictions next Monday, the State’s chief medical officer has said. File photograph: Olivier Douliery/AFP via Getty Images

Delays in reducing the time it takes to test and trace the contacts of new Covid-19 cases will not affect the decision on whether to ease lockdown restrictions next Monday, the State’s chief medical officer has said.

Technical issues have delayed the time it takes to test infected people and trace their contacts, but Dr Tony Holohan insisted that this would not be a factor in the decision of the State’s National Public Health Emergency Team on sanctioning the first wave of lockdown relaxations.

“I am not anticipating that we will be in a situation whereby that performance is going to limit us in terms of easing restriction,” he said at the Department of Health Covid-19 briefing on Wednesday.

The department announced that 10 more people have died in the State from Covid-19, the lowest daily death toll since late March, and that there were 159 new cases of the virus.

These latest figures brought overall coronavirus-related fatalities here to 1,497, of which 55 per cent, or 818 people, were nursing home residents. There are now 23,401 confirmed cases of the virus in the country.

The Government has proposed allowing up to four people not from the same household to meet outdoors from Monday and the reopening of some retail outlets such as garden centres, but health officials will make a final decision on sanctioning this based on infection rates and hospital figures.

Dr Holohan pointed to continuing improvements in relation to testing and contact tracing over the coming days and that the “trajectory” of improvement will continue “all the way up to Monday”.

In a setback to the Government’s Covid-19 response, however, Minister for Children and Youth Affairs Katherine Zappone on Wednesday night announced the scrapping of a scheme to provide temporary childcare to healthcare workers – launched just last week to provide childcare at home for front-line medics – due to the low take-up by childcare providers.

Only six providers signed up to be part of the service, with owners citing difficulties with insurance cover and concerns over possible transmission of the virus for the low number.

The HSE will pledge in a new plan to be unveiled on Thursday that Covid-19 test results and contact tracing will be turned around within 72 hours – down from a nine-day average turnaround time that health specialists say is not fast enough to fight the pandemic.

The plan, aimed at supporting the process of gradually easing restrictions from Monday, will set out a series of key performance indicators, including the number of tests per week, the turnaround time for results and the targets for faster contact tracing.

Dr Holohan dismissed the possibility of schools reopening earlier than planned, playing down the Taoiseach’s enthusiasm that this could happen sooner.

Leo Varadkar had said earlier on Wednesday that reopening schools for children “over the next couple of months” was “among the safest things” that the State could do in light of latest medical research.

Dr Holohan said that there was “a very small number of studies” on the issue involving “small numbers of children”, but insufficient evidence to change official advice on reopening schools.

No consideration had yet been given to the wearing of face coverings in classrooms when schools are due to reopen in September, he said.

Government sources suggested the Taoiseach’s intention had been to put the education system on notice that schools would reopen in September and to combat claims that this may not be possible.

Sources suggested schools could reopen earlier, by about a week or so, to allow children with special needs to reacquaint themselves with the school setting before term starts, while teachers and staff could be allowed back in the opening phases to prepare for the school year.

Dr Holohan said he was still advising against non-essential travel in or out of the country, despite the EU pushing for borders to reopen in order to revive travel in the June-August holiday season.