Cairn Homes spends €500,000 on PPE for workers ahead of return to work 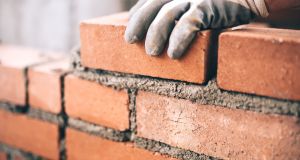 Cairn Homes said its current gross cash position was €156 million, after subcontractor and supplier payments of €23 million were processed in April 2020. Photograph: iStock

Cairn Homes has spent more than €500,000 on personal protective equipment for employees and subcontractors as it prepares to reopen its residential construction sites on a phased basis from May 18th as restrictions imposed to slow the spread of coronavirus are eased.

The homebuilder said it had put in place protocols to protect employees, subcontractors, residents and customers as it ramped up operations following the Covid-19 shutdown. The company said it was also considering the provision of on-site food for workers.

However, show homes will remain closed in the short term and customer viewings will be restricted to virtual tours, with Cairn expecting this to change in later phases of the Government’s plan to reopen non-essential retail services. That is expected to hit the volume of new sales this year.

Among the measures introduced are deep cleaning of almost completed new homes between customer and surveyor visits, a staggered return of site and construction personnel from May 18th to ensure social distancing and the implementation of the company’s return to work strategy, and the potential use of technology such as GPS to facilitate circulation management.

The company, which has 15 active development sites, said it expected to see project timelines extended as a result of the pandemic, with some expected closings moving to 2021 and spring sales launched postponed until summer. The company may return to sales viewings by appointment from June 8th.

Cairn said its online sales platforms showing new reservations were marginally ahead of cancellations over this period, and there had been “robust” interest from institutional investors for the multifamily private rental sector.

“The health and safety measures will lead to new ways of working and this will have an impact on the efficiency of our homebuilding operations. Project timelines will be extended and as a consequence, there will be an impact on both site preliminary and management costs, ” chief executive Michael Stanley said.

Predicting the broader Irish industry would see fewer new houses completed in 2020, Mr Stanley said Cairn’s financial position would enable the company to continue to deliver new homes, although it was likely to postpone any planned new site commencements until later this year.

Cairn said its current gross cash position was €156 million, after subcontractor and supplier payments of €23 million were processed in April 2020. The company last week concluded the planned disposal of a non-core site for €11 million.

The company has already suspended ordinary dividends and a €60 million share buyback programme, and executive directors are foregoing cash bonus entitlements in the fiscal year.