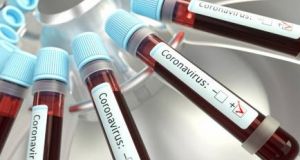 The HSE testing arrangements will contain key performance indicators, including the number of tests per week, the turnaround time for results and targets for contact tracing

A new plan for Covid-19 testing is to be published on Thursday committing to a 72-hour turnaround time for the the completion of test and contact tracing, as well as the long-promised target of 100,000 tests per week.

The Health Service Executive plan will form a core part of new safeguards that will support the process of gradually easing restrictions from May 18th.

The HSE testing arrangements will contain a series of key performance indicators, including the number of tests per week, the turnaround time for results and targets for contact tracing.

It comes after criticism of the nine-day average turnaround from when a test is taken to results returning to the patient. Most experts recommend a 72-hour timeframe.

Health officials have promised improvements, and have highlighted a range of technical issues including data-entry errors, a lack of automation and systems that cannot interact with each other which are delaying the issuing of results.

The State claimed in March that it could achieve as many as 15,000 tests each day, later revised to 100,000 a week. However, until recent weeks the number of tests carried out has fallen well short of targets, which has contributed to the delays.

Taoiseach Leo Varadkar said on Wednesday he accepted some targets had not been met, but he said the HSE was now in a position to carry out 100,000 tests per week. He was confident the HSE could achieve a 72-hour turnaround time for test results and tracing.

“I absolutely accept criticisms from anyone that says we should have done that sooner, but I can also guarantee that absolutely everyone across the system is pulling out all the stops to get to this point.

“The target is absolutely to have a test result turnaround time of 72 hours, but it’ll never be 100 per cent, you know. There isn’t a test that I’m aware of where you get the results within 72 hours 100 per cent of the time.”

He said the figures supplied to him by the HSE were “hugely underwhelming… It is very disappointing to hear it is taking so long.”

His Sinn Féin counterpart, Louise O’Reilly, said it was more than six weeks since the target of 15,000 per day was announced. “They missed it and there is nothing to suggest that another target will help. The target is meaningless without the necessary tracing and isolation facilities.”

The HSE said on Wednesday evening that the median time from referral for testing to the completion of contact tracing was “circa four days when you consider hospitals and community together”.

Community tests – those not taken in hospitals or residential settings – take a median time of five days to complete the process, whereas hospital cases take a day to complete testing and another day for tracing, although this can be longer in complex cases.

Such complex cases are more common in hospitals and care homes or direct provision centres as there may be more contacts, or there may be language barriers or complications arising from a person’s illness or even death.

“The recent testing of residential care facilities was particularly challenging in ensuring the timely notification of results as there were thousands of residents and staff across over 600 settings. This process obviously pushes out the average time for contact tracing,” the HSE said.

It said that it had no accurate figures on the split between complex and non-complex cases at the moment, but prior to the mass testing of nursing homes, “approximately 80 per cent of cases were marked as routine”.

A senior HSE source told The Irish Times that the majority of tests would be turned around in 72 hours, but there would “always be outliers for more complex cases”.